I have no time for these lunatic protestors- they’re a collection of insane Facebook hate algorithms looking for a book burning – BUT economic mandates are hurting them most and they have a right to protest – even if the protest is angry and offensive, but right now Trev has thrown a temper tantrum and put out a 10 hour live stream recruitment video for every anarchist with a grudge – he’s radicalising this to a dangerous level and only extreme police violence will remove them BECAUSE OF HIS ACTIONS! 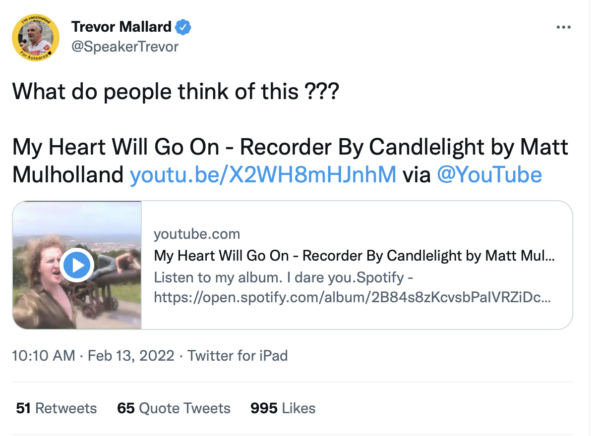 This is the Speaker of the House playing petty dictator psychological games with a mob he is inflaming – WHERE THE FUCK ARE THE ADULTS?

Why is this moron with anger management issues still allowed to start a riot???

Jesus wept – when will he start playing screaming rabbits on loop! This is bordering on psychological torture now – why the fuck is the tantrum throwing man child with a long history of anger management issues still being allowed to keep provoking things?

The question every Labour Party apologist defending Trev’s insanity on Twitter must ask themselves is this – what level of Police violence do you support to force these lunatics he’s radicalised off the lawn?

Watching Woke Twitter cheer his provocation and senseless radicalization of this is jaw dropping!

Trev could order the Police to taser children and set dogs on old people right now and NZ Tribal Left Twitter would blame the protestors for having children and knowing old people!

I never thought I’d ever get to the stage in NZ politics where I was holding back the Left from calling on the the State to smash their fellow citizen – I always thought that was a threat from the Right!

If you are on the Left and see no issues with what Trev’s actions are creating, you are part of the problem!