New Workplace safety laws have made little difference to workplace fatalities, with over one person a week dying at work in 2020.

This was an increase on the number in 2015, when safety laws were reformed following the Pike River disaster.

The Council of Trade Unions (CTU) said more funding is needed for WorkSafe to enforce the law, and that workers need more freedoms to speak up when they feel unsafe at work.

It’s not just the CTU who are part of the problem, it’s bloody Worksafe as well.

Look at their bullshit excuse…

“It’s easy to blame the regulator WorkSafe, but they can’t be everywhere at once. There’s only 125 odd of them and there’s 500,000 workplaces,” Jarvie said.

5 years since Helen Kelly died and her passing still hangs like a giant black hole over the entire Union movement.

WHERE HAVE THE UNIONS BEEN during the Covid-19 Pandemic? That the question can even be posed suggests that something is very wrong with the New Zealand labour movement. After all, the answer should be all around us.

At its high-point, under the late, and sorely missed, Helen Kelly, the New Zealand Council of Trade Unions (CTU) liked to present itself as the largest democratic organisation in New Zealand. With upwards of 300,000 affiliated members, that claim was no idle boast. As Kelly proved, the CTU has always possessed the potential to do an enormous amount of good.

So, where has it been? Why hasn’t its current president, Richard Wagstaff, become a household name during the pandemic? Up there with Ashley Bloomfield, Michael Baker, Shaun Hendy and Siouxsie Wiles? Where was the tireless advocacy for essential workers: the people who stood at the check-out counters, drove the trucks and operated the warehouses? When supermarket workers came under attack from the stupid and the selfish, why were they defended with more passion by their bosses, than by the CTU?

…Helen Kelly wouldn’t have put up with the glib asthetics of wokedom, there was too much work to be done at the coal front than arguing over pronoun use.

Luckily for the insipid Union movement, the ghost of Helen returns with the Fair Pay Agreement which she wrote and went far further in building worker power via universal Union membership than anything the CTU was offering.

Universal Basic Income, 4 day working weeks, not for profit community wrap around service employment, Financial Transaction tax to shift tax burden from workers to Corporations and universal Union membership are necessities to cope with the magnitude of change coming.

Come on Union movement, Helen’s Ghost can’t do all the heavy lifting. 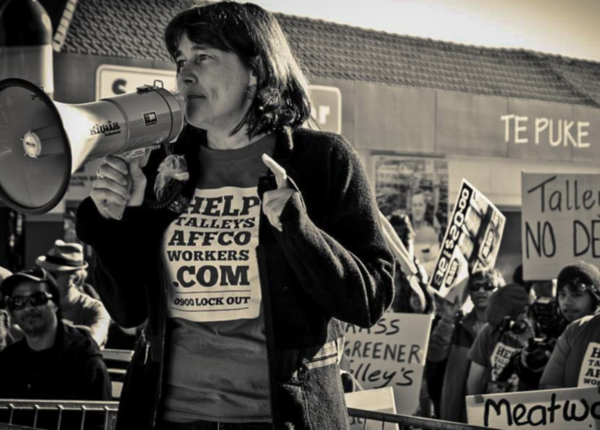