I WONDER IF JACINDA will befriend the new President of Chile, Gabriel Boric, with the same enthusiasm that she befriended Justin Trudeau? Boric comes to the presidency at the age of 39 – two years older than Jacinda was when she became New Zealand’s Prime Minister in 2017. Even so, that makes him the youngest head-of-state in Chilean history.

The far-Left Boric won his political spurs ten years ago, in 2011, when he emerged as one of the student leaders of the bitter street-fight for more affordable and equitable education services for young Chileans. Boric’s unexpected victory over his far-Right opponent, Jose Antonio Kast, was celebrated by a crowd numbering in the hundreds of thousands in Chile’s capital, Santiago. Older Chileans, remembering the election of the Marxist, Salvador Allende, in 1970, didn’t know whether to laugh or cry. They had seen this movie before.

Boric’s decisive win, 55 percent to Kast’s 44 percent, is a reflection of Chile’s two years of political turmoil. Two years of popular mobilisation culminating, first, in the radical Left winning control of the process to create a new Chilean constitution, and now, with the election of the young leader who the mainstream Chilean news media consistently dismissed as too radical for the job of President.

Indeed, Boric was so radical that he drew forth as his principal political opponent an outspoken supporter of Augusto Pinochet, the brutal dictator responsible for the military coup against Allende’s Popular Unity government in 1973. Kast campaigned unapologetically on a hard-Right law-and-order platform and made promises to restore Chile’s traditional (i.e. conservative Catholic) values.

In the first round of voting Kast secured the largest fraction (but less than 50 percent) of the popular vote and, backed by the supporters of the other right-wing parties, was widely predicted to win the final, run-off, contest between himself and scarily radical Boric, the next-highest polling candidate.

Ironically, it was the very real prospect of a Pinochet clone taking control of Chile that mobilised the numbers necessary for Boric to win. Voter turnout surged, with 15 percent more people voting in the second round than the first. Critically, it was the votes of Chile’s youth that turned the tide in Boric’s favour. So radical had been the street-based protests of 2019-20 that there was little enthusiasm among the young for the business-as-usual politics of a presidential election. It was only when they realised that all the gains of the past two years could be wiped-out if they stayed at home, that they rallied to the polling-booths in their thousands. 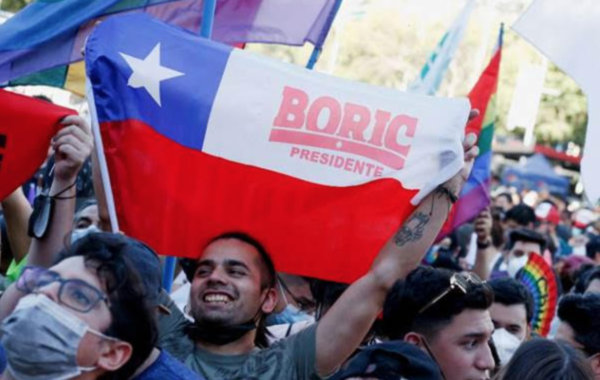 It will not all be plain sailing for Boric when he is sworn in as President, in March of 2022. The Chilean Congress remains in the hands of the same centre-Left and centre-Right moderates who have dominated Chilean politics for the past 30 years. Boric can count on a clear majority in neither the National Assembly nor the Senate, meaning that the fulfilment of his programme to construct a genuinely inclusive “social state” will require either superlative parliamentary skills, or, a willingness to keep the people mobilised – effectively daring the one percenters and their military protectors to do to Boric what they did to Allende.

So, at first blush, it seems most unlikely that Jacinda will be all that keen to be photographed giving Boric a comradely hug at his inauguration. She will be invited, of course, along with heads-of-state and prime ministers from all over the world, and from South America and the Pacific Basin in particular. But will the gal who got hitched at a billionaire’s New Zealand hideaway, and boasted Lorde as her wedding-singer, accept Boric’s invitation. Would Canberra and Washington approve of her being seen to cuddle-up to yet another left-wing Latin-American loose cannon? Once again, it seems most unlikely.

And yet, by March of next year, Jacinda will be facing some pretty daunting choices of her own. Maoridom’s judgement on the recommendations of the He Puapua Report will be out, and the broader debate on co-governance and fundamental constitutional change will be getting underway. If she and her colleagues follow the precedents set over the past four years, and step away from the big political challenges laid at their feet, then Labour’s chances of being re-elected for a third term are slim – at best. Will Jacinda be happy to rest on her Covid laurels? Or will her failure to keep any of Labour’s non-Covid promises overwhelm even those?

Wouldn’t she be wise to spend a little quality-time with President-elect Boric in the intervening months between his stunning victory and his formal inauguration – if only to quiz him about how an historic debate about the future direction of a nation, along with the constitutional reforms required to secure it, might best be organised?

He would likely tell her that once such a process is started, she will find it almost impossible to control – let alone stop. But, he will also likely tell her not to try. By giving ordinary people a real say over their future, her government will bind them to her in exactly the same way that her handling of the Covid crisis in 2020 bound her to “The Team of Five Million”. Trusting the people works, he would tell her. So when, inevitably, those with a vested interest in the status-quo launch their counterattack – don’t flinch. If the people see the future they have won for themselves threatened, they will rally to its – and their leader’s – defence.

That is, after all, his own story.

Besides, 2022 will likely be the year in which Queen Elizabeth II goes to join her fathers. If that happens in the midst of a vibrant constitutional debate in which thousands of young people – young Māori and Pasifika in particular – are engaged, then the chances are high that the inhabitants of these islands will witness the birth of the bi-cultural Republic of Aotearoa. Especially if the combined forces of neoliberal capitalism and the white supremacist Right attempt to strangle it at birth.

Assuming the people prevail, and the Aotearoan republic is born, then the chances must also be high that Chile’s President Boric will cross the Pacific to offer his support, and bear witness to, the inauguration of its first President – his good friend and comrade, Jacinda Ardern.

Most Recent Blogs January 20, 2022 • Comments off
Announce protest actions, general chit chat or give your opinion on issues we haven’t covered for the day.

Response To David Seymour – Office of the Auditor-General

Most Recent Blogs January 20, 2022 • Comments off
David Seymour MP wrote to us asking us to inquire into the Department of the Prime Minister and Cabinet’s decision…

Most Recent Blogs January 20, 2022 • Comments off
Hon Carmel Sepuloni Minister for Social Development and Employment The Government’s strong focus on supporting more people into work is…

Most Recent Blogs January 20, 2022 • Comments off
The chair of the National Maori Authority has told the Ministry of Justice that it is time to overhaul donations…

Most Recent Blogs January 20, 2022 • Comments off
The experimental weekly series provides an early indicator of employment and labour market changes in a more timely manner than…

Most Recent Blogs January 20, 2022 • Comments off
The Prime Minister has announced if Omicron cases spread into the community, the country will move to the traffic light…

Most Recent Blogs January 19, 2022 • Comments off
For people who forget they are in Wellington

Most Recent Blogs January 19, 2022 • Comments off
Announce protest actions, general chit chat or give your opinion on issues we haven’t covered for the day.