New Zealand news
Home Deconstructing Headlines THIS is what a Police State looks like you stupid antivaxx QAnon lunatics!

The frustration with the feral Qanon lunatics and antivaxx nutters is that their anti-science bullshit and Facebook hate algorithm mythology eclipses the real dangers of a casual Police State forming in NZ!

It’s not a satanic child pedophile ring using a bio weapon virus spread by 5G technology to enslave us with a mind altering vaccination to bring about a shadowy one world Government out of the UN that Hitler Ardern that you should be frightened by you clowns, it’s the actual NZ Police State’s real creeping Police Powers you need to be fearful of!

Every month there’s a new revelation that the NZ Police are abusing their power.

Months before that they were caught illegally taking photos of Māori teenagers.

The police practice of issuing “formal warnings” to people who haven’t been convicted of any crime – and sharing that information with other parties – has been found to be illegal.

In a ruling that could change the way police officers do their job, High Court Judge Paul Davison​ found that the warnings – issued 20,000 times in the past 10 years – had no basis in statutory or common law and were a breach of the Bill of Rights Act.

Warren Pyke, the lawyer who sought the judicial review for a client who had been issued with one of the warnings, said most people would have no idea that such information was kept and shared.

Police have seized almost 1500 guns in an effort to remove firearms from criminals in the wake of legal changes after the 2019 Christchurch terror attack, but some fear they are targeting lawful owners and using unnecessary search powers.

Hundreds of guns have been taken under warrantless home searches, which are carried out when there is suspicion an offence punishable by imprisonment has or is being committed.

Those at the centre of these raids, their relatives, lawyers and politicians have raised concerns over how they are being conducted and whether police are abusing these powers.

… On top of all of this, the Police are quietly attempting to strengthen already incredibly powerful proceeds of crime powers that reduce conspiracy to just an individual and we have already seen the cops attempting to use these powers for ‘organized crime’ against civilians…

In terms of the proposed law change, the definition of an “organised criminal group” is also likely to be a point of contention when the Government introduces the amendment bill to Parliament in the first half of 2022.

The police currently have a low conviction rate for the offence of “participating in an organised criminal group”, in which a number of elements – such as knowing at least three people are working together – must be proven.

The proposed change to the Criminal Proceeds Recovery Act will lead to an extra $25 million seized each year, according to the Justice Ministry briefings released under the Official Information Act.

The briefings reveal the proposal could conflict with the New Zealand Bill of Rights Act, in particular the right to freedom of association and from unreasonable search and seizure, as well as natural justice – although the public interest may justify those limitations.

“Although association with a member of an organised criminal group is not enough by itself, it is one of the factors as to whether a forfeiture order can be made. This may have a potential chilling effect on freedom of association,” the briefing to Faafoi said.

“The organised crime proposal requires police to prove significant criminal activity by the group to which the respondent is associated, and that the respondent’s known legitimate income is likely to have been insufficient to acquire the interests in the restrained property. This is the safeguard, though the scope captured by association could be broad.”

The vast majority of the proceeds-of-crime cases that the police have pursued are related to drugs, gangs and organised crime. Recently, they have increasingly been going after the proceeds of other alleged crimes including fraud, tax evasion, exploitation of slave labour, movie piracy and even a workplace fatality.

…So why on earth would we give the Police enormous omnipotent Eye of Mordor powers with their mass surveillance face recognition tech?

Right now, the NZ Police are using mass surveillance facial recognition software from an Orwellian company that illegally sources photos without any sign off from the Privacy Commissioner or their own Police Boss!

The Police then held a ‘stocktake’ of these types of unapproved face recognition software trials and lo and fucking behold the Police quietly admit to a $9million face recognition network they are setting up with zero oversight from the Privacy Commissioner???

Police have been quietly setting up a $9 million facial recognition system that can take a live feed from CCTV cameras and identify people from it.

This would push New Zealand into new territory for tracking citizens.

It will be run by a non-police contractor – US firm Dataworks Plus – and collect 15,000 facial images a year, with that expected to expand up to 10-fold.

Their latest move is to create some fake watchdog panel over mass surveillance powers that no on gave them!

Let’s not forget their sudden surge of warrantless searches… 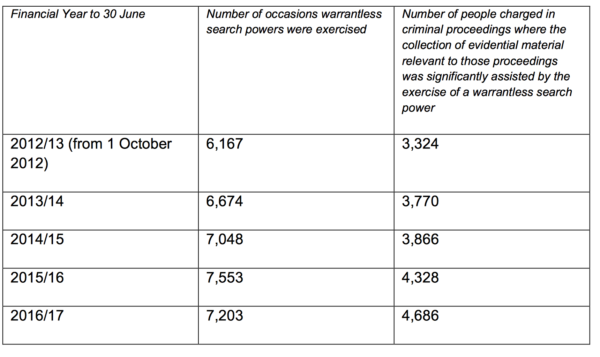 …on top of this enormous state surveillance power, there is a constant push from the SIS to gain even MORE power!

The public must decide if spies should conduct greater data surveillance to identify the next terrorist, Security Intelligence Service director-general Rebecca Kitteridge says.

Six months on from the Royal Commission of Inquiry in the Christchurch mosque terror attacks, Kitteridge wants to have a public campaign, akin to that of the Covid-19 pandemic, to talk about the possible “technology-privacy trade off” and unite New Zealanders behind national security threats.

The duplicitous and underhand manner in which the NZ Police have quietly amassed a mass surveillance network alongside their constant abuse of power to get what they want is an incredibly dangerous combination for any State Agency to gain.

The real police state is staring you in the face, it’s not some fantasy concoction of a Steve Bannon Bot manipulating your fears and ignorance to turn on public health measures and medical science!

NZ punk anarchist, Neil Roberts, wrote this on the wall of the NZ Police super computer before he attempted to blow it up in1982…

He failed and killed only himself, but his final words were not wrong!