Rafael Nadal rolled back the years to produce a stunning Australian Open win over Denis Shapovalov to reach the semi-finals. The eyes of the sporting world were on the two star players as they dug deep to produce a five-set thriller. It was an emotional rollercoaster for both men, one that Nadal eventually won, but the drama didn’t stop at the end of the match.

Tempers flared as the match swung back and forth before the experienced Spaniard snuck through, keeping alive his dreams of winning a second Australian Open and first since 2009. The sixth seed battled back to win the match 6-3, 6-4, 4-6, 3-6, 6-3 and he stumbled across the line victorious despite an obvious physical struggle during the fourth set, one fans feared would call an early halt to the match.

Nadal made it through to the semi-finals and dispute being written off by many experts and former players pre-tournament, chalked up as a lowly sixth seed heading into the Australian Open, the doubters are being won over. Traders at the leading online betting apps have also been forced to give Nadal the credit he deserves with odds-makers slashing his outright price to win the Australian Open.

Can he go all the way and capture yet another Grand Slam title? With Andy Murray already out of the running and the well documented problems suffered by Novak Djokovic, it looks like Rafa won’t have a better chance to get his second Aussie Open gong 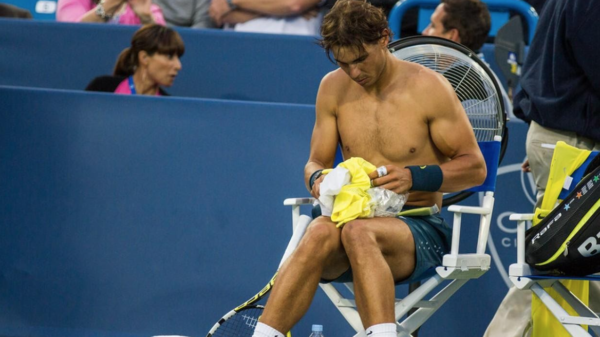 Rafa required treatment for a stomach issue during that bad-tempered win in the quarter-finals and with the match locked at two sets all, it looked like Shapovalov had the momentum needed to go on and win the match. The Canadian had fought back from two sets down to draw level and entered the fifth and final set with the wind in his sails while his opponent positioned on the opposing side of the net looked battered and bruised. Nadal had been in that situation many times in the past and he knew what was needed to grind out the right result. He showed the character to get it.

Following that win over the Canadian, Nadal is now just two wins away from landing his second Australian Open and a record 21st Grand Slam of his career. Achieving that would not only break the record for Grand Slams won, it would also move him clear of nearest rivals Novak Djokovic and Roger Federer. Nadal is the biggest name in tennis of his generation and has already proven himself as one of the greatest tennis players to have ever lived.

Of the Grand Slams, the French Open has been his most successful tournament with 13 titles won between 2005 and 2020 but the Australian Open has returned just one win and that came against Federer in 2009. Nadal has also won the US Open four times and Wimbledon on two occasions in 2008 and 2010.

Despite being beaten by the better player on the day, Shapovalov refused to bow out of the Australian Open silently. Speaking to the world’s press following that marathon match with Rafa, the Canadian accused his opponent of receiving preferential treatment from umpires, adding that he 100% believes this to be the case. Denis flagged up the amount of time given to Nadal between points and the length of treatment time given for a stomach injury. There was also an ugly moment in the match when Shapovalov asked the umpire to enforce a time violation and when this request was rejected, he was heard to shout “you guys are all corrupt”.

It was a sad end to what had been a great contest and fantastic advert for the Australian Open. The match had everything, including an early lead for Rafa, the fightback from Denis, an injury then that outburst from the beaten man at the end of play. Nadal refused to be drawn on it, saying only that he thought Denis was wrong on this occasion. That answer in itself helped to shootdown the accusations, showing Nadal had no time for mud slinging and would, instead, be concentrating on getting fit and ready for the semi-final match.