Sometimes a politician does something venal and stupid which has the opposite effect they intend. Parliament’s speaker Trevor Mallard’s childish abuse of power in turning on the sprinklers at parliament and playing annoying music to the protest is such an instance.

The police are faced with a difficult situation in Wellington but they are trying to resolve it with engagement and respect rather than tear gas, pepper spray and water cannon. It’s quite alarming that some who have marched on other issues have been calling for a “strong arm” approach by police because an outright attack on the protest would set a low benchmark of tolerance for future civil disobedience protests and our civil rights would be the biggest casualty into the future.

The big majority of people at the protest are decent working-class New Zealanders despite a minority shouting all sorts of deranged things. Yes, the protest as a whole is incoherent, contradictory, leaderless and rudderless. But to stop there is to miss the bigger point. Overwhelmingly it is an expression of frustration and anger at decades of workers struggling at the margins of society where life is something that happens to you rather than something you shape for yourself.

These people have experienced going backwards economically and socially for 40 years under successive Labour and National governments while the country has been run for the wealthy. The protestors lack the traditional working-class leadership provided in the past by a strong union movement. They have developed, quite rightly, a deep distrust of politicians and are therefore susceptible to the masses of misinformation in what one commentator calls the “rivers of hate” on social media.

However, despite the outward appearance, the group has come up with of list of nine issues they want the government to address (I would agree in all or part with six of them) It’s a reasonable approach in a democracy and the government must engage – not just because a few hundred people in a parliamentary protest are asking for it, but because some of the issues they raise are of widespread concern.

I have previously spoken out against government policy on vaccine mandates and their use should be urgently reviewed by the government. (Canadian states have begun to withdraw their use and we should follow) For example there are enough rapid antigen tests available now to allow unvaccinated teachers and health professionals to turn up to work able to prove they are not infected and therefore safe to do their job alongside their vaccinated workmates.

There is a widespread feeling the government is not listening on issues such as this and the media has inadvertently added to that perception.

I can understand and support the media collectively advocating the government’s nationwide strategies to deal with the pandemic. This is a public health emergency and needs a collective nationwide approach for the common good. But on the other hand the media has suppressed discussion of other options or approaches in the desire not to spread misinformation but this in turn has fuelled conspiracy theories and driven some people further down rabbit holes.  There has been no serious discussion of the need for vaccine mandates for example and the so-called “team of five million” has splintered.

Meanwhile the wider issue of social media is a much more important for our democracy and should be getting much more attention.

I have come across two proposals recently from others which I think have real merit and would start to get at the heart of the spread of malicious misinformation online.

Firstly, we must use “whatever means necessary” to require Facebook to shift to a subscriber model rather than the advertiser-driven model they use at the moment. There is incontrovertible evidence that Facebook’s algorithms, which are designed to keep users engaged for the longest time to keep eyeballs on advertisements, are driving users to more and more extreme content and sites which deliver misinformation.

For this reason Facebook, and other social media outlets, have become an existential threat to democracy and must be heavily regulated.

To be clear this is NOT a call for censorship of any kind but simply for social media sites to work in the interests of people, not advertisers.

Secondly the government should provide all citizens with “information credits” to use online to purchase the news services they want with clear guidelines to prevent them being used for fake news sites or conspiracy-focused news producers. For example a person could choose a couple of websites and the credits used to pay the subscription. We all benefit when we have a shared understanding of issues even if we disagree on what should be done about them.

There will be other good ideas out there and if just a fraction of the time being spent in faux outrage against the Wellington protest was spent on discussing suggestions like these we could move in a more positive direction and reduce the likelihood of similar situations in the future.

In the meantime the police are on the right track to resolve the protest with discussion and engagement. Trevor Mallard and his fellow travellers should butt out. 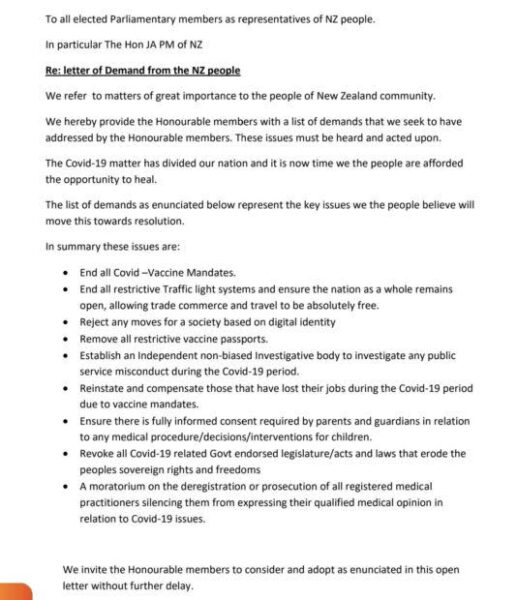