The awful Oranga Tamariki Critical Race Theory case of ‘Moana’ enters its latest dreadful  twist, this time the mothers lawyer is trying it on…

The question about whether a young Māori girl should be removed from her Pākehā caregivers so that her cultural needs can be met has been the subject of another hearing this week.

…to bring you up to date on this abomination of social policy, you need to appreciate the madness that has led up to this insanity.

There are effectively 3 cases to OT’s CRT madness.

The first case was the dreadful exclusive on Newsroom by the brilliant Melanie Reid that exposed the horror of at birth uplifts by Oranga Tamariki using nothing more than an algorithm that states anyone who has had one child uplifted automatically has any new child immediately uplifted as well. The cruelty and lies Oranga Tamariki staff used while Melanie films their malice shocked the nation and Māori Labour Caucus demanded answers.

Oranga Tamariki was freaked out by Labour’s fury because OT had been created as a neoliberal welfare experiment by Bill English to use big data to automate processes to intervene early in life when the data warned it would cost the State more money downstream in Court and Jail costs.

After such a backlash to their usual racist profiling for uplifts, Oranga Tamariki spinelessly attempted to curry favour with the new Government by starting controversial ‘reverse uplifts’ of Māori children who had been placed with white step families because fuck cracker and the heteronormative colonial patriarchy.

I’m only half joking with that last line, but it is true that woke CRT was the driving core philosophy of these new woke social workers.

The argument was that white people could not look after brown children, so all Māori children who had been placed with white step families were rounded up and reverse uplifts attempted to show the new Government that OT was now slavishly concerned with the identity politics of their actions.

This became the two other cases, ‘Moana’ and the ‘Māori siblings’.

In the case of ‘Moana’, Family Court Judge Peter Callinicos destroyed OT’s case by cross examining one of their woke social workers and devastatingly picked apart lie after lie after lie spun by OT to justify taking a recently placed Māori child – Moana – with a white step family.

Family Court Judge Peter Callinicos cross examination was so brutal in revealing the insidious racism of OT and their deceitful tactics that OT had other Judges intervene and attempt to sway Callinicos and complain about him. 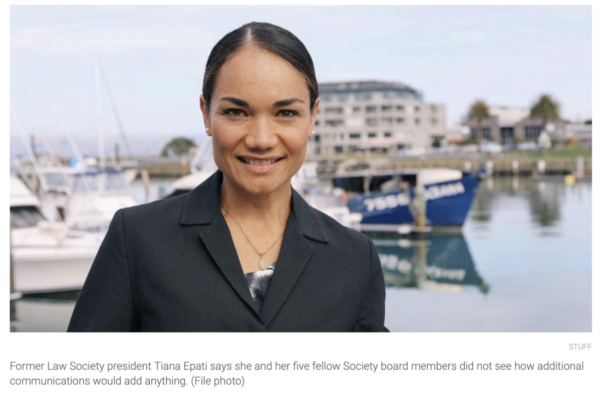 …how former Law Society president Tiana Epati came to the conclusion that a damning report written by Sir Geoffrey Palmer, several QCs and various law professors didn’t add anything to a debate where Oranga Tamariki were intervening in a Judge because his questioning of an OT staff member was devastating for a test case they were building is a tad beyond me.

In the third case, Oranga Tamariki have gagged Newsroom and other media covering the case of 4 Māori children who were placed with a white step-family for 4 years and told it was a ‘forever home’. The white step parents sold their home and bought a bigger house so the kids could have their own rooms only to have the exact same woke critical race theory ban them from having the 4 children despite being told they were.

We now find out that the Whānau they were being moved to had a sex pest living there and this was hidden to get the uplift through.

If dogma is trumping the actual welfare of children, we have entered a quasi religious belief system as social policy stage and the Identity Politics Left have to be taken harshly to task for such egregious conclusions!

I have called for a very long time for Māori providers to take over Oranga Tamariki because I believe Tikanga values are far more healing and beneficial to all vulnerable children than the hollow costed values of our neoliberal welfare system that sees clients of their services as opposed to children in need.

However, what is happening here in Oranga Tamariki IS NOT tikanga, it is woke critical race theory the dogma of which declares no white family can give a brown child a good life.

No one is arguing that there isn’t a long a vicious history of white agencies taking indigenous children, and we have moved heaven and earth to ensure that moving forward, Māori welfare providers are contacted before any uplift is authorised, but that’s not what is happening here, what is happening here is OT are reverse uplifting Māori children WHO ARE ALREADY IN THE CARE of white step families and who have been told they are in ‘forever homes’! The psychological damage OT has no problems inflicting on these children by uplifting them again DESPITE BEING TOLD THAT IS THEIR HOME simply to fulfil some weird Critical Race Theory Dogma is fucking disgraceful as social policy.

The material well being of these Māori children is being determined by an ideology that either sees them as a cost or a skin colour.

We are re-traumatising children for dogma.