The excerpt in the image below comes from part of the lead story in the weekend’s Sunday Star Times.

It paints a picture of the protesters currently occupying Parliament’s lawn in decidedly more nuanced terms than the protestors often seem to believe the media interested in doing. 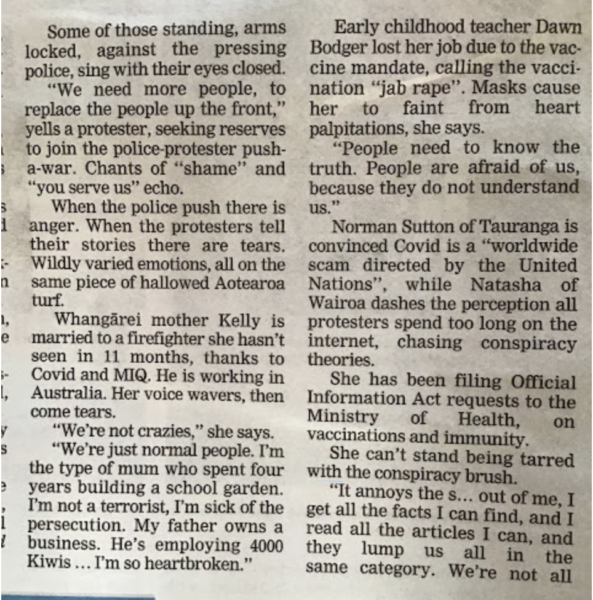 Now, the reason that I find this interesting is because of the context of this presentation. Both in terms of where it was in that day’s newspaper, but also how it represents a bit of a ‘crystalization’ of a trend for media portrayal of the protest.

What do I mean by this?

Well, we’ll start with the second point first. Over the past few days there’s been a definite emphasis on the part of some commentators to push the line that the protesters, while they might appear to be a rambunctious rabble of general conspiracy-theory toting ne’er-do-wells … “actually have a point”.

Just what that “point” is may vary somewhat from mouthpiece to mouthpiece, but effectively seems to boil down to “the Government’s done the wrong thing”, with a specific flavouring of “vaccine mandates, Traffic Light Settings, and other Omicron-era control measures are too restrictive / actively harmful”, and a side-order of “time to start Learning To Live With The Virus”.

Except, of course, not ‘learning to live with the virus’ in the way that we’d been intending to, nor in the way that Singapore et co are attempting to manage it. You get the idea.

Now how much of said ‘flavouring’ depends quite strongly upon the individual columnist or commentator. Some basically just want to go for the ‘lightly seasoned’ option of presenting it as being a Government comms issue that’s ‘legitimate’ to voice opposition to – others want to go rather further.

This brings us to my second point – the first one I’d mentioned, around where this charming excerpt was to be found within the context of Sunday’s Star Times.

Elsewhere on the page was a story about how, surprise surprise, the Government’s Covid-control measures had allegedly ‘gone too far’ and were now actively ‘counterproductive’.

The ‘meat’ of this piece was provided via perspectives from two people representing rather different groups: somebody from the hospitality sector, lamenting the manner in which ‘fear’ was contributing to people not patronizing restaurants and the like; and a doctor, talking about how understandable caution from people about going out into the community with Omicron circulating had lead to a rather significant reduction in the number of people making appointments to see their GP.

Predictably, the front page highlight talking about the article lead with the picture and soundbite from the doctor – a public health perspective, and a not unwarranted one. And then spent only a smaller portion toward the end of the actual article itself on what he had to say – instead giving over its mainstay to the unrelated commentary around the retail sector suffering due to people not wanting to go out and socialize in the midst of a pandemic. A classic bait-and-switch – and attempt to conflate a commercial issue with a public health one (because yes, people not engaging with primary healthcare providers can contribute to rather more important problems than a bar being underpatronized).

Now, we’ve been down these styles of cycleway many, many times before over the course of the pandemic.

This is partially why we so frequently find heads of business associations, and prominent figures of the hospitality industry given such prominence in media pieces talking about the pandemic response. Because it’s one of the areas where you can actually point to and say “see all this saving lives? It’s got a Cost Attached.”

Various media have also been very keen to try and present the situation in more ‘popular’ terms – not as something between small and sectorally interested groups against the dominant public will, but rather as the general public being divided in amidst itself.

You can see this in the reporting in the Herald from 2020, for example, discussing our then second lockdown. They’d declared Auckland to be seriously “divided” over the decision to extend the Level 3 phase.

Except when you looked closer at it …, and as I said about the time –

“You might be forgiven for thinking that this meant somewhere around a fifty fifty split of opinion on the matter.

75% of Aucklanders thought that the extension of lockdown was “appropriate”. This was made up of 56% who were simply fine with the extension – and a further 19% who wanted the lockdown to go longer.

Meanwhile, that 25% of opponents was made up of 14% for a shorter lockdown, and 9% for the lockdown shouldn’t have been initiated at all.

That’s three-to-one support for the lockdown. And yet somehow this is a serious degree of “division”.

Meanwhile, New Zealanders overall supported the most recent Lockdown by a ratio of more than four to one – 62% in favour of the lockdown we had, 19% in favour of an even further extended lockdown, 10% for a shorter lockdown, and only 6% for no lockdown at all.

Technically a 3-1 majority for Lockdown means “divided” , sure – as does a 4-1 majority.

But it sure does sound rather different when you phrase it like that, frame it like that, rather than OVERWHELMING MAJORITY SUPPORTS THE GOVERNMENT’S COVID-19 MANAGEMENT”.

So how does all of that pertain to this description of the protestors on Parliament’s front lawn?

At the moment, the protestors are a very vocal ‘battering ram’. They won’t, by themselves, force the Government to abandon sensible Covid-19 control measures. What they can be ‘weaponized’ to do is exactly the same thing that the Brian Tamaki MC’d ‘freedom rally’ shenanigans of a few months ago can be co-opted for – attempting to make very strident opposition to said “let’s actually live like we’re in a pandemic” measures seem like something that’s an ordinary person perspective. Not one that’s effectively relegated to a few hundred people on a patch of grass who are outnumbered by an order of magnitude every day by the number of Kiwis choosing to get a Booster.

Because, as the Sunday Star itself  told you on the very same page – New Zealanders continuing to take the virus seriously is imposing an economic cost on some business owners.

It’s also continuing to considerably buoy the Labour party’s popularity – and keep National down in the low 30% range. People remember.

The mind extrapolates on its own, and places things in their own kind of order – conveying a sense that there’s some broad ‘consensus’ of both ordinary people and ordinary business-owners gradually coalescing in unity against the Ardern-led Government, mask requirements and vaccination mandates and a ‘climate of fear’ about going out for dinner etc.

It doesn’t have to be true. It just has to look like it might be plausible. And then the hope is that events start taking on the characteristics plotted out for them all of their own accord.

Because the previous approach, of media and media-platformed talking heads, basically shrilly scolding the general public for taking the pandemic too seriously and being too keen on Labour in significant consequence of that, has not worked.

And in the absence of a genuine mass movement to overturn the Government or its Covid-control measures … you make do with what you’ve got instead.

A few hundred people who’ve managed to ‘Annoy Wellington’, most definitely … and suitably ‘airbrushed’ to highlight the less odious elements within the general protestor milieu.

That remains to be seen.

However, even though it is situated in amidst nearly half a dozen more ‘actively empathizable’ vox-pops, the guy claiming that Covid-19 was some sort of “worldwide scam directed by the United Nations” does somewhat undercut the notion that “we’re not crazies”, as another protestor tearfully sought to emphasize.

But I would cautiously suspect that over the next few weeks, and one hopes that won’t be how long the occupation of Parliament’s lawn drags on for, we’ll see an escalating tide of media and commentariat ‘contributions’ which seek to equivocate the other side of the protest (you know, the ones intimidating and even egging schoolgirls in masks and spitting at bus-drivers) in favour of claiming it’s ‘ordinary New Zealanders’ just seeking to do entirely ordinary things. And who have a ‘right to be heard’.

A right to eat out at hospitality venues, too, one presumes.

Or maybe that’s going to become presented as more of a ‘duty’ – something mandatory for the rest of us, whether we feel particularly comfortable going out at this time or not.