Earlier today I saw some excitement from people in response to a US DoD assessment that the Russian military in Ukraine was, and I quote, “95% still intact” as of yesterday. This was taken by some of those commenting on the article as their having suffered 5% losses – and seemingly, thousands of Russian KIAs as a result.

The inference people drew from the headline was, perhaps understandably, that the Russians were going very badly.

Except here’s the thing. That’s not at all what any of this indicates.

We’ll start with the obvious one – the presumption that “95% still intact” means one man in every twenty that the Russians had sent in is now dead or severely wounded. That is not the case.

Measuring the combat power of formations has never simply been an exercise in calculating how many men you’ve got left as compared to when you started. And the increasing saliency of hardware over the millennia has added significant complexity and nuance to proceedings.

Indeed, speaking of equipment – it is not even necessary for a tank, say, to be destroyed for it to be removed from the tally of ‘intact’ elements. A perhaps (un)surprisingly high quotient of Allied armour in the later Second World War was rendered combat-ineffective via mechanical problems or damage to other systems such as the main gun.

This obviously meant that it would be less- or even un-able to participate in its intended role, and therefore in that sense, sure, combat power of its parent unit is degraded.

Except there is quite a difference between a tank being destroyed outright – and a tank not being present for a phase of operations due to something which is repairable and which sees it back at the front in the not-too-distant future.

So no, no 5% of Russian combat power no longer being “intact” does not mean one in twenty Russian troops deployed to Ukraine are currently dead or wounded. Although I have no doubt that in some formations there will indeed have been significant casualties.

In fact, that’s one of the things which is probably distorting the overall picture people are drawing from all of this.

Russian VDV operations in the early days of the conflict saw … very high losses of men and material – and were, as we had remarked at the time, frankly bizarre that they had been attempted in the manner involved.

The losses during the ultimately unsuccessful attempt to seize Antonov airbase (Hostomel) at the start of the invasion are unconfirmed, but near-certain to have been significant given its recapture by the Ukrainians. A similar pattern appears to have played out at Vasylkiv; and this is before we consider the Ukrainian claim of having downed two Russian Il-76 transports, at least one of which was reportedly carrying a full contingent of paratroopers.

Why I say that these may have been ‘distortionary’ – is because those are … not insignificant losses, entailing several hundred men and associated equipment, suffered in the first two to three days.

Which, if you’re just looking at total figures overall, may lead to unwarranted presumptions as to how things have gone subsequent to that.

Now, the other point which is vital to make is that a 5% loss of combat power over fifteen days of intensive military operations for an attacker is … not unexpected. Particularly given many of the current battlezones are located in and around urban areas, terrain where offensive operations are notoriously costly.

Hence, of course, the frequent preference of modern militaries to engage in sustained aerial, artillery and/or missile bombardment of such places prior to – or even in lieu of – a direct ground assault.

In this regard, the Anglo-American lead Coalition’s efforts during the 2003 Invasion of Iraq may prove interestingly instructive – with, at its height, an oft-quoted figure of 1,700 aerial bombing and missile strikes in a single day carried out largely against urban-proximate targets; and sustained use of both conventional and cluster munitions persisting for days after that.

Of course, the British, American, Australian, etc. actions must be contextualized – the idea having been to minimize Coalition casualties not so much through simply producing a flattened battlespace, as both breaking the Iraqi will to resist (the crux of the so-called “Shock And Awe” doctrine) and carrying out destruction of particular targets (potentially including one Al Jazeera office in Baghdad) in ways which did not therefore (at least .. in theory) necessitate the direct involvement of ground troops.

The reason that these instances are instructive, is because they represent a fundamentally different approach to what we have seen from the Russians in Ukraine – thus far.

There have most certainly been both aerial and artillery bombardments of urban areas carried out by Russian forces.

However, these have not been at the scale and scope anticipated of them for a hypothetical ‘full scale’ war. Which is not to suggest that these attacks are not serious nor highly destructive – only to emphasize that the Russians would doctrinally be almost expected to be far more so in these regards (particularly in terms of the usage of artillery as a primary force vector).

One explanation which has been advanced by some Western analysts is that the seeming low scale of Russian aerial bombardment sorties is due to some alleged incapacity on the part of the Russian air force to actually carry out complex and frequent combat air operations.

This is clearly incorrect, as the relatively recent Russian record in Syria (which featured in some cases over a hundred sorties a day, and an average in the 40s) amply demonstrates.

It might be tempting to presume that the smaller involvement of Russian air power in Ukraine as compared to Syria may be due to concerns about the relative strength of Ukraine’s remaining anti-air capacity – however this, too, does not feel like the full answer.

Instead, I would contemplate whether the seemingly ‘scaled back’ deployment of Russian air power might stem from the same reason that their use of artillery has appeared likewise to be less prominent (although steadily increasing).

Namely, that their initial invasion approach was something of an opposite one to the American-led ‘Shock And Awe’ ethos. Albeit, it would seem, still possessing a certain element of that same “we’ll be greeted as liberators” decidedly wishful thinking.

Whether due to their own observation of the fairly direct consequences of Western militaries’ enthusiasm for bombardments (i.e. – a marked uptick in the ordinary people who now have a very, very good reason to choose to become insurgents, considerably frustrating a long-term occupation effort) or out of a desire to avoid the overwhelmingly negative PR which comes with utilizing highly destructive weaponry in built-up civilian-inhabited areas, the Russians appear to have ‘held back’ [a very, very relative term indeed] somewhat on these approaches, in favour of the direct application of ground assets.

Something which seems to have cost them a fair amount of that 5% we started out this piece discussing, partially explicating their seeming shift toward greater employment of artillery currently.

In closing, I feel it is useful to draw attention to the two tables that I’ve attached here as an image. They’re from relatively outdated (but still useful) US Army internal documents, and as you can see they discuss anticipated losses (both combat and otherwise) in various types of engagement and over relatively short (up to five days) and longer timescales – measured in daily and monthly casualty rates respectively. 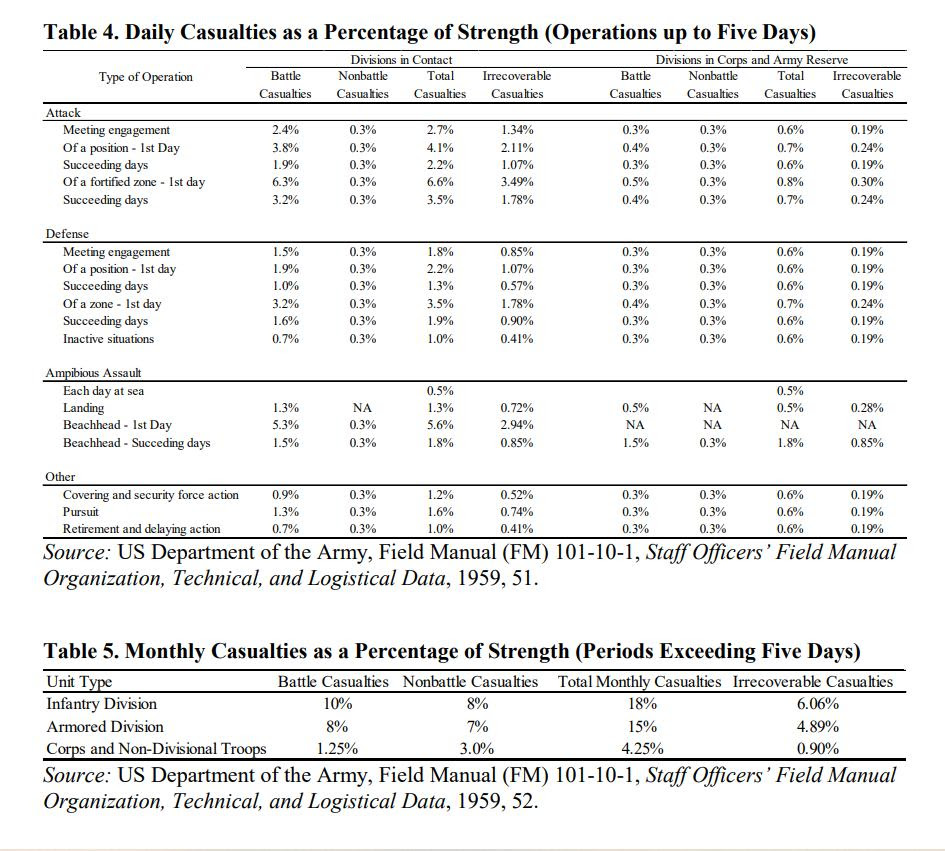 Now, 1959 (when these were published) is a long while ago, and it can be fairly argued that warfare’s changed in a number of ways over that time (in particular, improvements in battlefield medicine improving survivability … as weighed against ever more lethal weaponry).

Further, these figures were likely the result of US analysis of the then relatively recent experiences of World War Two and the Korean War – that is to say, conflicts often characterized by ‘parity’ or ‘near-parity’ opponents … even if specific engagements within either could be decidedly otherwise.

Yet while it can definitely be asserted that at the strategic level, Ukraine and Russia are decidedly not ‘parity’ opponents – in terms of the forces that were sent into Ukraine, the relative disparity in various areas between them and their opponents is arguably much smaller.

I therefore suspect that, as a very rough guide, there may yet be some probative value for its utilization here.

So, assuming that the American Department of Defense is reasonably accurate in their assessment that Russia had ‘only’ retained approximately 95% of the combat power it has brought to bear in Ukraine … after fifteen days of offensive operations, I am not sure that a 5% reduction in overall combat power – which, again, does not equate to a 5% figure for casualties amidst the invaders – is actually that unexpected.

Indeed, juxtaposed against the sentiment which has seemingly taken root in some areas that Ukraine might somehow actually win this war based on how things look from tiktok videos shared to social media, it may seem seriously surprising to some that the figures are not much higher. 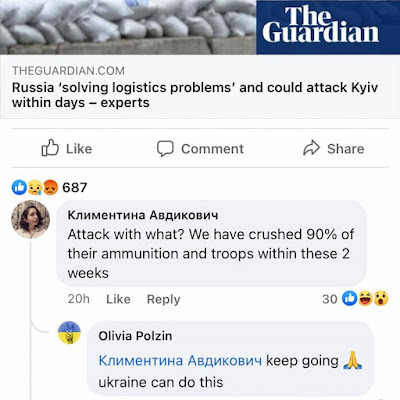 Concordantly, given the serious scale of the Russian invasion force, some might also suggest that even 5% of that being out of the fight (one way or another) should present a truly staggering amount of manpower and material to have been lost or incapacitated over just over a two week period.

From our individual human perspective, it almost unquestionably is.

Yet that is what modern, conventional warfare regularly entails – and more.

I would say “it is well that it is so rare, then” – except given current events both there in Ukraine, as well as the numerous smaller-scale conflicts also going on elsewhere (Yemen, for example), it is worth noting that the ‘rarity’ is a decidedly localized phenomenon.