New Zealand news
Home Deconstructing Headlines No! No! No! It isn’t the Police who need investigating for Dumb Lives Matter protest violence – IT’S THE POLITICIANS!

What the flying fuck is going on here?

The IPCA has the authority only to investigate police actions – so it won’t be able to make determinations around whether the right calls were made by others, like Parliament’s Speaker Trevor Mallard, who blasted protesters with sprinklers and ‘Baby Shark’.

Look, yes, of course, after an incident as politically violent as this Dumb Lives Matters protest, the police MUST be investigated, but the Police aren’t the problem here!

We all watched the Police like hawks during this feral insanity, and I think we can all hand on heart say that the Police did an incredibly professional job under the most awful of situations.

Come on, I’m no apologist for the fucking cops, you all know how much I despise them and how their bullshit ruined my life!

I have zero time for people amongst us who want the power to rule over us and call it protection.

If I had honestly seen any action by the cops that was beyond the scope of what they were being asked to do, I would have screamed bloody murder because I don’t like cops to start with, but come on, we all watched what happened here, the cops were infinitely patient and withstood calls from the Woke Left to go in with batons swinging!

Andrew Coster saved this country from the Wellington Middle Class Marxists who were screaming for the military to become involved and were attempting to create loopholes to have him replaced by the Governor General for fucks sakes!

The Police weren’t the problem, the fucking politicians and their supporters were!

On the morning of Thursday Stupid Thursday, the protest movement had lost momentum with a vast splintering of the factions in an over night social media shit fight where the Christian element of the protest left because of the violence that had occurred on Wednesday.

At the EXACT MOMENT  the protest was imploding because of the lack of any intellectual philosophical cohesion amongst the desperate groups of lumpenproletariat what did Big Trev do?

Trev threw a temper tantrum in front of the media on Parliament’s balcony and demanded the Police clear the lawns.

He created a common enemy and live-streamed a 10 hour recruitment video that drew in  thousands more protestors for fucks sake!

He then turned on the sprinklers and started basic bitch psy-op tactics akin to the FBI during the Branch Davidian siege in Waco by blasting protestors with music overnight.

Trev wound those protestors up for 3 weeks and when they lashed out called it a hate crime!

Where the fuck were the adults here?

Jacinda refused point blank to meet with the protestors and that was acceptable because they had made threats of violence and no Government should parley under those terms, but the Parliament could have sent down representatives to at least hear the pain of these people!

Before you say no one could have done that, the Māori Caucus did that at Ihumātao, if your counter to that is those protests were different, then I’d point you towards the incredible job the Māori Caucus did in negotiating all the Presidents of all the Gangs to do a vaccination video!

Look, we passed broad stroke legislation on the hoof in the face of a fucking pandemic! Of course there were people caught up in the feedback loop of those policy decisions. There were far more Kiwis who couldn’t take the jab than we first thought, and through no fault of their own they lost their jobs!

I never agreed with these protestors, I think the mandates were necessary and right! These people are feral lunatics with crazy conspiracy theories, but their pain is real and they have the right in a liberal progressive democracy to protest!

Yes they were angry because they have economically suffered and the isolation of that led many down far right conspiracy rabbit holes, but if we don’t want the poor to have their economic pain manipulated by the far right THEN DO SOMETHING ABOUT THEIR FUCKING ECONOMIC PAIN!

By refusing to acknowledge them, by causing a common enemy with deeply flawed police tactics, to then spray them with freezing water and blast them with music – what the fuck did you think was going to happen? 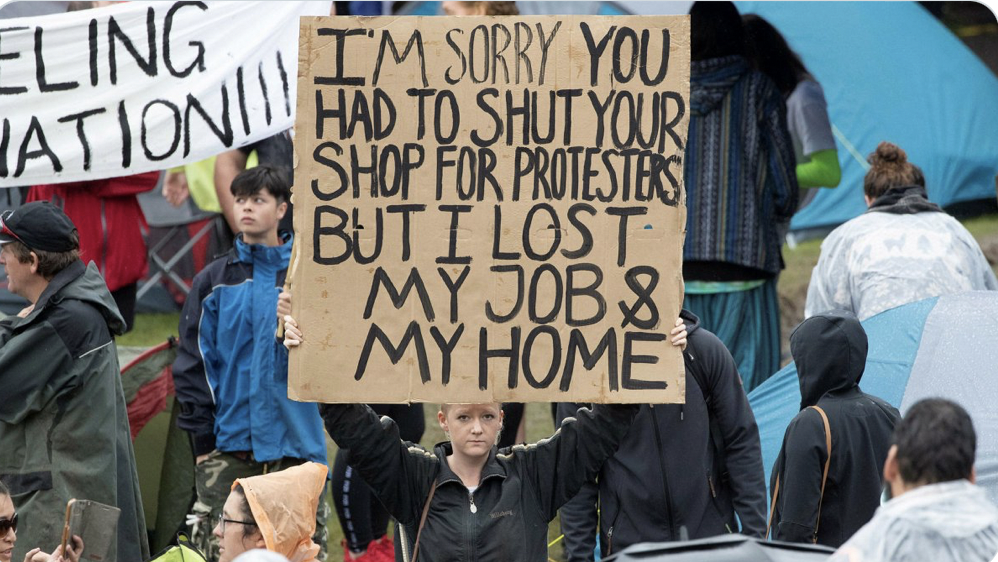 All we did by refusing to de-escalate this madness is radicalise another 10 000 Kiwis! We recruited for the far right and handed them a propaganda coup! THAT MUST BE INVESTIGATED!

Investigating the cops is necessary and proper in an event like this, but they aren’t where the fucking responsibility lies, Mallard and the Government’s refusal to meet with them are!

What is most egregious in this clusterfuck are the woke Twitter and Wellington Middle Class Marxists who are now silent because they had their privilege pricked and freaked out and endlessly screamed NAZI at the protestors. Those tribal Left want to sweep this all under the carpet so that their own role in it is also left unexamined.

If Key was PM and pulling this kind of stunt by allowing him and his mates off the hook, the Left would be screaming, but because it’s our side and they felt scared by the smelly lumpenproletariat, they are as quiet as field mice.

Your cowardice is as ugly as your hypocrisy. These weren’t Nazis, they were Kiwis who were hurt by broad stroke policy. The Police force required at the end of this would have been far less if Mallard hadn’t throw a tantrum and the Government had met and acknowledged their pain.

Instead cancel culture and Outrage Olympics from Labour/Green middle class supporters decided how to respond and they collectively recruited for the far right WHILE building the momentum for a new Police State to go hunting for ‘Nazis’.

That colossal cock up demands some kind of fucking accountability!
Increasingly having independent opinion in a mainstream media environment which mostly echo one another has become more important than ever, so if you value having an independent voice – please donate here.