Let me start by acknowledging that Neil Young can take his art to make a stand (and a better commercial deal) as is his right. 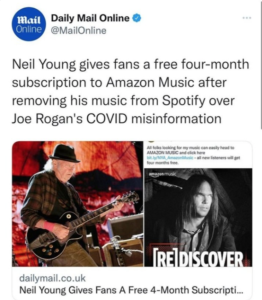 Let me acknowledge I think Joe Rogan is wrong about vaccines.

Let me acknowledge that Spotify is a corporate vampire who pays its artists poorly.

All that said, for me this latest virtue signal to cancel Spotify highlights the inability for the Left to even engage in debate any longer.

The power afforded to them via Twitter lynch mobs has created a false sense of power they are abusing.

Rogan has a larger audience than any existing news cable show!

The fundamental danger of the woke Left constantly screaming that white men are the problem is that they’ll soon become it.

Woke commercial media have purged white males with their dogma and they’ve ended up going to Rogan.

Rather than alienate that audience even further – why not actually engage with Rogan and debate him? He’s not Goebbels, he can be reasoned with, hell he said he’d vote for Bernie!

The problem is the Woke Left have given up on winning people over and instead prefer to censor, cancel and deplatform!

Rather than cancel Rogan why not debate him?

Because the Left forgot how to!