Buried where no one would read it was this odd announcement…

New Zealand-owned media companies Stuff and The Spinoff have formed a partnership to help their journalism reach the widest possible audiences.

The two companies will exchange content, distributing important stories to mass and niche audiences across their sites and publications.

Gutsy journalism? Like that time they framed a Labour Party Staffer for a sexual assault?

My guess is that NZ on Air, feeling immense pressure over the low rating middle class woke bullshit they fund, have tightened their criteria up so that only digital media with a certain audience range can get any more money now and Spin-Off and Stuff signing up to this will allow them to access these new rules they will have been quietly tipped off to.

This merger reeks of a new way for them to both gain taxpayer funds.

A Spin-Off/Stuff merger would feel like being at a posh dinner party stuck between Toby Manhire, Duncan Grieve, Sinead Boucher and Ali Mau all arguing over who hates white heteronormative cis males the most while boasting how many miles they cycled between vegan snacks.

Note, The Working Group gets NO money from NZ on Air, yet we continually beat their legacy funded NZ on Air podcasts. 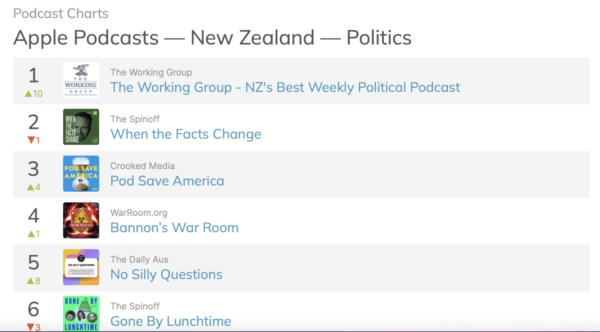 If you want to support independent media who call it the way we see it and don’t pander to your middle class bias, throw some cheese The Daily Blog’s way!