There are serious issues with the Public Interest Journalism Fund that demand genuine scrutiny.

The Government giving money for journalism with strings attached is creating big problems for the organisations which accepted it. Some now regret taking the handouts.

…the questionable ‘journalism’ this funds is one thing, the requirement for an editorial agreement before you could ever apply is completely unacceptable in terms of fourth estate journalism…

As it happens, no serious critic is suggesting that the fund, which is administered by NZ On Air, obliges successful applicants to not criticise the Government (or that government officials contact journalists to tell them what to say).

What critics have focused on are the criteria that prescribe how the Treaty of Waitangi should be presented — a point that Forbes, Jennings and Russell conveniently never mentioned.

And the first of the general eligibility criteria requires all applicants to show a “commitment to Te Tiriti o Waitangi and to Māori as a Te Tiriti partner”.

Critics allege that the media fund has a very particular focus and an overriding purpose: to discourage criticism of the government’s push for co-governance with Māori even as it is being inserted into a broad swathe of the nation’s life — from legislation governing the RMA and health to the conservation estate and Three Waters, among many others.

In short, anyone wanting to argue that the Treaty doesn’t imply a “partnership” is very unlikely to get any money. Yet, the question of a “partnership” is exactly what critics of the Government’s co-governance plans — who are alarmed at the prospect of 16 per cent of the population being granted equal say with the other 84 per cent in many spheres of New Zealand life — are contesting.

I have quit jobs because of editorial interference and have been blacklisted by most  corporate media because I refuse point blank not to speak my mind.

I’m never going to apply for Government funding that demands an editorial line.

Journalistic standards – yes, 100%. Anyone taking taxpayer money including our public broadcasters have an obligation to uphold the very best journalistic values, but that’s not the NZ on Air funding demands, it demands an editorial position!

Here are examples of the “guidance”:

• Māori have never ceded sovereignty to Britain or any other state.

• …our society has a foundation of institutional racism.

• For news media, it is not simply a matter of reporting ‘fairly’, but of constructively contributing to te Tiriti relations and social justice.

• How does the [media] organisation cover the UN Declaration of the Rights of Indigenous Peoples, and efforts to enact it such as He Puapua?… For publicly funded news media, He Puapua recommends ‘increasing the number of Māori governors, te reo and Māori cultural content.’

• Repeated references by the government to the English version [of the Treaty], in which Māori supposedly ceded sovereignty, have created systematic disinformation that protects the government’s assumption of sole parliamentary sovereignty.

In short, NZ On Air is handing out millions of taxpayers’ money with the strong recommendation that journalists not only accept but promote the view that Māori never ceded sovereignty to the Crown; that Parliament’s “sole sovereignty” is an “assumption”; that New Zealand’s institutions are inherently racist; and that concepts of “fairness” should not get in the way of promoting the prescribed interpretation of the Treaty.

This isn’t about the. values of journalism!

This isn’t about the training, supporting and building of journalism!

This is a social engineering editorial line and it is inappropriate in the extreme to tie public funding of money for journalism to any editorial line!

Now, the crazy thing is I absolutely agree with the aims of their editorial position on Maori, but I sure as Christ won’t be told what to fucking write!

By playing to middle class virtue signals, the Government avoid the heavy lifting to rebuild the shattered free market monstrosity they have now!

What the Government should be doing is reforming the market by hitting Facebook and Google up for a Journalism tax which is funded to accredited media for them to decide the journalistic focus, not targeted niche woke knee jerks or local journalism which should be their existing obligation.

Meta, formerly Facebook, has said it won’t be paying New Zealand news publishers for their content and has instead offered to run training programmes to “support” the local media industry.

…they are getting away with this because the Broadcasting Minister is hopeless and thinks paying corporate media for diversity will miraculously solve Google & Facebook taking advertising revenue.

Re-create the market properly by taxing Facebook and Google for journalism that the big players use while obligating public service broadcasters to meet the needs of diversity.

This woke cavalcade of poorly viewed taxpayer funded content created with all the same intellectual rigor of your average suburban Wellington mommy blogger trigger thresholds has produced an editorial team who are in a daily struggle session to prove who hates heteronormative white cis males the most.

$6million dollars so white people can feel guilty and virtue signaling their therapy learnings just seems so fucking Wellington, am I right? 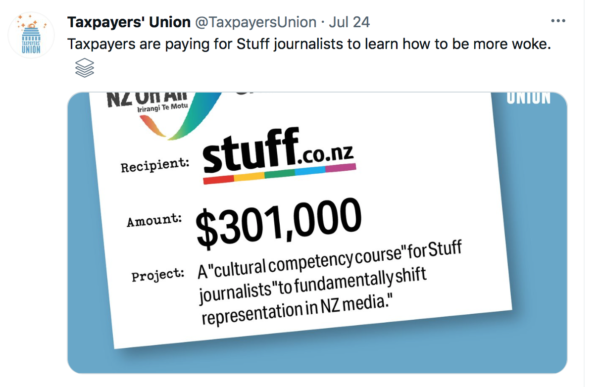 Apparently Stuff could take $300k for a ‘cultural competency course’ which obviously didn’t cover goading Martin Devlin into a suicide.

The Right mistake all of this as funding Labour Party propaganda when in fact it’s socially engineered identity politics that is winning so that Labour don’t have to actually reform the broken media market.