Ummmmm. They are not very good are they? 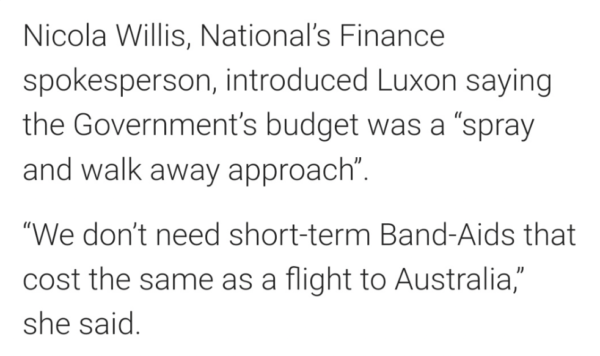 Is it a spray and walk away budget or is it a band-aid? Why throw in the trip to Australia?

I feel dinner parties at Nicola’s place would be over egged, have way too much salt and a mix of foods that just never should be together, like peanut-butter and Turkey with spam and kidney bean entrees.

There was a lot of hype about Nicola’s appointment as Finance Spokesperson, but she’s  only there to prop up Luxon’s image with women seeing as he is a Handmaid’s Tale level anti abortionist.

David Seymour is so going to be the Finance Minister.

Let’s move on with Luxon’s latest boofhead fuck up…

Luxon was also asked a question about comparing growth in the LCI versus CPI.

The acronyms stand for two important measurements in the changing cost of things – LCI is the Labour Cost Index, measuring the cost of work, and the CPI is the Consumers Price Index which measures the changing cost of goods and services in the economy (inflation). It is the main measure of inflation.

The questioner asked Luxon to give his thoughts on LCI versus CPI, because over the longer term the cost of labour had increased more than the cost of goods and services.

The question appeared to stump the moderator Russell Moore, a National Managing Partner at Grant Thornton.

Luxon was not sure either.

“Sorry, I want to clarify – LCI, what do they mean?” Luxon asked.

“Are they talking about the local cost index,” Moore asked?

“Or are they talking about wages – because there are a couple of acronyms I just want to make sure we’re getting it right,” Luxon said.

…these acronyms mean little to us, but they matter to economists and political leaders. It’s like saying you want to buy a tank of petrol for an EV.

This question follows Luxon telling all media that ‘incomes are only up 3%’, while using the Labour Cost Index as his evidence – the problem is that the LCI doesn’t actually measure incomes.

When he was pushed on this at the post-Budget speech, it turned out that he didn’t even know what the fucking LCI was despite using it as evidence for his wage claims!

He’s fucking hopeless folks and that doesn’t matter, because National aren’t selling his brain power they are selling his self certainty.

Christopher believes in an evangelical prosperity theory where his 7 properties are evidence Jesus loves him and that he’s special.

That’s what National are selling a frightened and uneasy electorate, Christopher’s sense of self certainty.

Christopher is certain God loves him, and he imbues that certainty effortlessly in his 45 second CEO soundbite routine, but beyond that, he has zero intellectual curiosity in anything other than God loving him and allowing him to live his best blessed life.

Christopher cares about the first class passengers and when he wants to be ghetto and working class he talks to the pilots and first class cabin staff.

Christopher considers those who can’t afford to fly as bottom feeders.

Thankfully for National strategists, Christopher’s contempt for the little people doesn’t detract from his certainty, it probably boosts it.

NZers love being bossed around by rich men in suits. It fulfils a lot of suburban fantasies for both bored wives and repressed husbands.

Christopher’s ability to become David Shearer after 45 seconds won’t blunt Christopher’s appeal to frightened and angry voters who hate Jacinda, because Christopher’s certainty is what those voters desperately want and need.

Finally, the whole ‘band-aid budget’ metaphor is funny because we wouldn’t need a bloody band-aid if National didn’t keep chopping off limbs every time they are in power!

Many blokes have walked away from Labour and the Greens and are voting National because they are sick of Jacinda and our ever triggered woke hysterical activists.

1: His policies will make things far far far worse in this country in terms of housing, inequality and poverty so don’t pretend voting against Jacinda for him makes you radical or edgy, it makes you a fuckwit

2: Luxon is such a boofhead, he’ll let David run rings around him in terms of pushing through crazy ACT Party policy because Luxon isn’t interested in philosophy, he’s interested in God’s love of him being the best he can be. Policy is something the little people do, and Christopher don’t do little people stuff. David Seymour will be able to get everything he wants through.

If you think shit is bad now, a National/ACT Government will throw the baby, the bathroom, all the fittings, the towels and the toilet out with the bathwater.

Make no mistake, the smart yellow fox will jump over the lazy blue log.