Today’s Roy Morgan New Zealand Poll shows support for the two major parties unchanged in March with National on 38% still 6% points ahead of Labour on 32%. This is the equal highest level of support for National for over two years since January 2020.

The flashing warning sign here is that if NZFirst are scoring 4% this far out from the election, you can bet Winston is back on Election Day.

The really fascinating insight to this poll is how divided the Male and Female vote is between left and right.

After spending the last 5 years screaming that men are the problem, the Left have chased off male voters to the right… 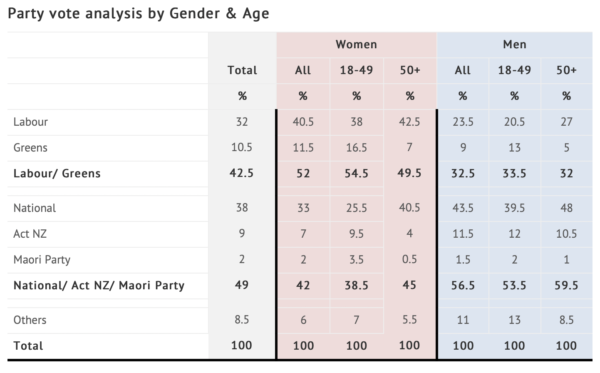 …with the Greens about to politely take out James Shaw and vote in new rules that will create a non-binary co-leadership model set up to allow Chloe to become co-leader, the perception that the Greens are just a Feminist party with some environmentalism thrown in could cause the Green Male vote to either transfer on mass to Labour, or be tempted by Winston’s machismo, Christian Lex Luthor’s Dad routine or stand up comedian David Seymour’s sick burns.

At a time when more women’s voices in positions of power have had platform and at a time when male identity has been so ruthlessly critiqued in open social media, a political cultural backlash is brewing and it will be anonymous incel Troll on 4chan nasty.

Gender and all the culture war fun that brings will be a central fault line that erupts as the economic pressure really bites.

The Greens will herald their non-binary co-leadership model as progress, the wider electorate will see it as emblematic of a woke dogma that alienates far more than it can recruit at a time of peak economic anxiety.

Pure temple politics is fine until all the people you’ve denied into the temple are far larger you can ever hope to be.

Oh and if Winston dodges the Grim Reaper over the next 18 months, NZ First are in and he will go with National.

This next election will be one of the most polarised in NZ history.