Jacinda has gained far more than a ‘tweak’ over 501s…

The Australian prime minister, Anthony Albanese, has vowed to consider changing how the government handles visa cancellations in an olive branch to ease longstanding tensions with New Zealand.

The pledge to look at tweaking the scheme prompted the visiting New Zealand prime minister, Jacinda Ardern, to declare the talks in Sydney on Friday allowed for “a reset” in the trans-Tasman relationship.

…we don’t appreciate how racist Australians are nor their love to bash kiwis. The 501 policy is wildly popular in Australia but it’s caused a gang war by exporting violent professional criminals who are standing over domestic gangs.

Not every 501 deportee is a professional criminal, but many are!

Before we can do that though, we need to stem the tsunami coming to NZ.

Many of these 501s have no life in NZ, they left when they were children. One could argue that if our former citizens have become criminals in Australia, then that’s on the Australians, not us!

If Albanese does ‘tweak’ the 501 policy to keep prisoners who have lived the majority of their life in Australia this will be an enormous plug in the level of dangerous criminals being deported back here.

This could be an enormous policy win for Jacinda and Labour.

…the issue with the heavy handed anti-consorting laws in Australia that are being proposed here, is that it ends up corrupting the Police.

Australia has had its highest levels of complaints regarding corruption in the Police force for nearly 2 decades – the blowback of forcing the criminal fraternity underground is that they corrupt the police force  – are our Police sophisticated enough to not get corrupted?

Of course they aren’t!

The meth trade is worth over half a billion each year, the 501’s are prepared to use a level of violence well beyond the domestic gangs and have introduced intense stand over tactics to seize market dominance of the meth trade.

South American cartels are incredibly sophisticated and corrosive to an economy and political system – Drive by shootings are one thing, uber violent Drug Cartels bribing officials and using counter intel tactics are quite another.

Is the Government taking this Gang war seriously enough?

Not according to their own internal reports…

New Zealand’s Gang Intelligence Centre has been blighted by poor leadership and has been struggling to reduce the harm caused by organised crime.

Multiple sources RNZ has talked to said the leadership of the Gang Intelligence Centre was “clueless”, and one person said it was run by a bunch of buffoons.

Leadership were said to have no understanding of the gang environment, which in turn meant the centre was failing to have an impact on the harm being caused by gangs.

…rather than understand this as a unique event in the NZ underworld with the importation of a professional criminal 501 class capable of vast violence, the dumb cops want to arrest everyone with a patch and call that strategic.

Minister Poto Williams and the Police have responded to this unique gang war dynamic by raiding every sergeant at arms and gang enforcer in a warehouse bargain basement policing fishing expedition tactic – which will most likely fail.

The Police to date have carried out 750 warrantless searches against these warring gang members, that’s a huge heavily armed fishing expedition we are embarking upon here with very little oversight.

The danger for us now is that South American Drug cartels are seeing NZ as a legitimate market, we need to urgently change that.

The Killer Bees are being supported by unpatched 501 syndicates to wage a war against the Tribesmen to take over Northland coastlines so that the meth can be imported directly by smuggling it over the beaches. The King Cobras run the airport while the Headhunters run the Port. The 501 syndicates are trying to succour safe supply chains for South American Cartel Meth but haven’t been able to beat back turf wars with the KC and Headhunters, so they are supporting the Killer Bees to take out dominance of the roads and coastline so they can import their meth directly that way.

This is all about market dynamics and raw power over a meth trade run by cartels who are using counter-intelligence and extreme violence to get what they want.

The point isn’t to go after every patched gang member, the point is to surgically strike the 501s who are generating the turf war. 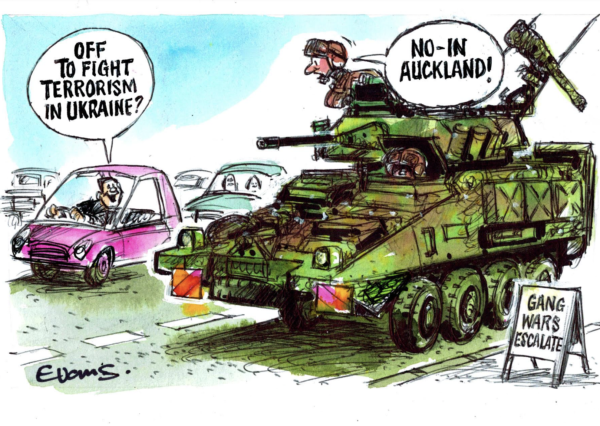 How “New” Is Our Democracy?

Featured July 6, 2022 • Comments off
The face of New Zealand and democracy has changed dramatically in the past few years and we need to reflect…

Malcolm Evans – America on a limb

Most Recent Blogs July 6, 2022 • Comments off
Malcolm Evans – America on a limb

Most Recent Blogs July 6, 2022 • Comments off
Green MP smashes polluters with the jaw bone of a Dodo Bird

Most Recent Blogs July 6, 2022 • Comments off
Announce protest actions, general chit chat or give your opinion on issues we haven’t covered for the day. Moderation rules are…

Most Recent Blogs July 6, 2022 • Comments off
The New Zealand Law Society Te Kāhui Ture o Aotearoa has welcomed a new Bill that will work towards reducing…

Most Recent Blogs July 6, 2022 • Comments off
Agricultural emissions should be priced at the farm-level outside the New Zealand Emissions Trading Scheme, He Pou a Rangi Climate…

Most Recent Blogs July 6, 2022 • Comments off
The Pōneke Collective for Public Transport Equity is calling for Wellingtonians to submit to the Greater Wellington Regional Council Future…

Most Recent Blogs July 6, 2022 • Comments off
Greenpeace Aotearoa is commending the Climate Change Commission for acknowledging that synthetic nitrogen fertiliser, which produces twice the emissions of…

Most Recent Blogs July 6, 2022 • Comments off
Hon Phil Twyford Associate Minister for the Environment A new report released today on the health effects of air pollution…