I have to hand on heart tell you I never believed Liberals who claimed Roe vs Wade could ever be overturned!

I thought it was something we told our daughters as a scary joke while tucking them into bed at night, ‘You go to sleep right now or the Republicans will sneak in and take away your basic human rights!” 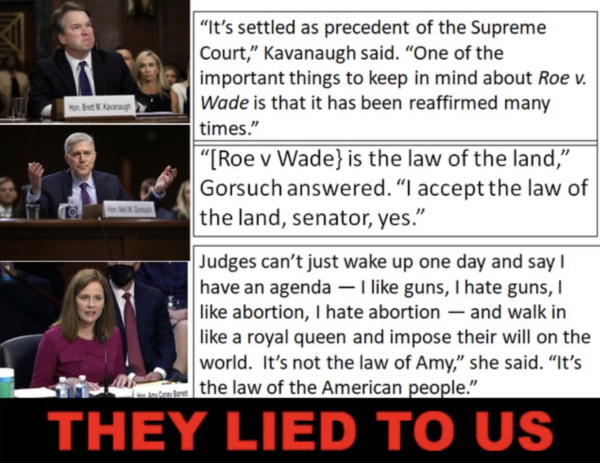 Every single one of the right wing Judges now preparing to take a massive leap backwards said they wouldn’t change Roe Vs Wade, and yet here the lying scumbags are prepared to betray their promises so their vengeful God can burn abortionists in hell.

Make no mistake this is a far right Christian attack on the rights of women backed by a lunatic fringe of 30% dictating to the other 70% something as intrinsic as basic health services.

This is the true legacy of spite Trump planted and its toxic harvest will literally kill.

That’s why, after watching all those right wing Christian judges make false promises to never tamper with abortion rights, we urgently require the issue to be put back to Luxon and get a clear agreement that ACT will quit any Government that attempts to restrict abortion rights and Nicola Willis will quit as Deputy of National.

No one is safe if the State claims this power over any one of our bodies, women have every right to expect a free abortion with wrap around counselling services if required.

Luxon can do the 45 second CEO soundbite but he has zero intellectual curiosity, he is a devout evangelical Christian whom believes his wealth is proof positive that Jesus loves him. His policies will make things far far far worse in this country in terms of housing, inequality and poverty so don’t pretend voting against Jacinda for him makes you radical or edgy, it makes you a fuckwit, especially if he has some devout desire to burn abortionists.

Some will argue I’m being unfair to Chris who has stated that it isn’t an issue, but he agreed abortion is murder and I’m sick of being surprised when right wing Christians promise one thing and then do another when they are in power.

I’m totally over that!

After this attempt to overturn Roe vs Wade, every Right Wing Christian seeking power is under suspicion.