The Left was strong and united in the face of Wall Street’s point man John Key flogging off our public assets for peanuts. The crowd thronged into the high thousands as activists shut down all lanes of road traffic in the heart of our largest City Centre. We stretched for ten city blocks.

On a trundler, activists tugged a large black guillotine up Queen Street in Auckland Central to settle it in a lofty position opposite the Auckland Town Hall. 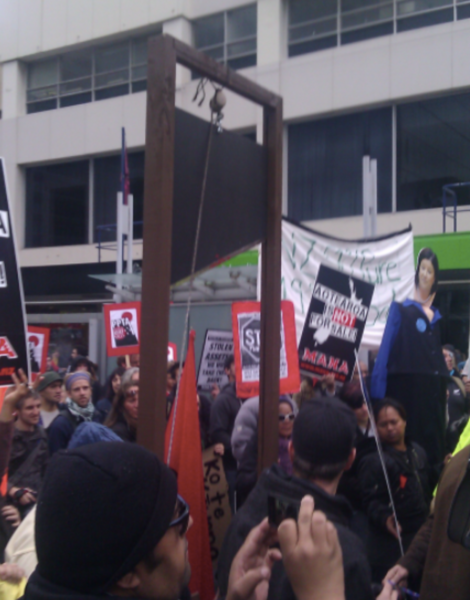 The crowd, comprised of every conceivable colour, flag and frankly, grievance carried all manner of signs, but they also carried effigies. Of National politicians and of Key himself. Effigies that as the afternoon wore on, became headless.

I’m too polite to give my opinion of John Key, other than to confirm that he wasn’t known as ‘The Smiling Assassin’ just because he made some people redundant.

All manner of speakers stood proudly next to the guillotine that day, gave their speeches, as the socialist hype man who shall remain nameless for the purposes of this article repeatedly promised the crowd that the piece de resistance – putting the guillotine to use – would soon follow.

A list of offending politician’s names were read out. Paula lost her head. She wasn’t the only one. 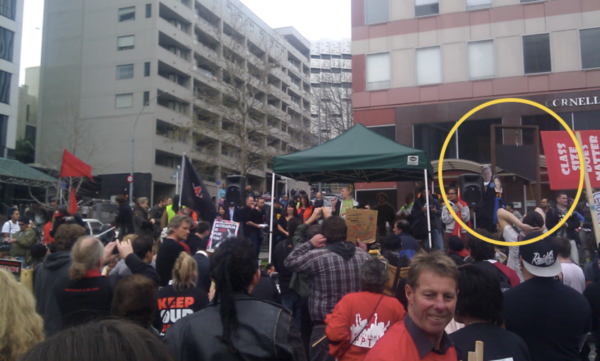 No one took it seriously – it was an act of political theatre and protected political expression – a venting of frustration by the masses of people who will never be in a position of power or privilege to rival that of even the lowliest backbencher in Parliament.

There were hundreds of children present.

No one screamed from the rooftops about our ‘violent’ actions, or stuttered in shock that we would dare ‘threaten’ politicians.

The event was endorsed by the Council of Trade Unions.

I was wholly on side with the cause of ANFS and remain so to this day.

My politics, my heart, and my life are with the Left. Even when the Left forgets who they are and what they’re supposed to stand for.

And even when the Left forgets how we protest. 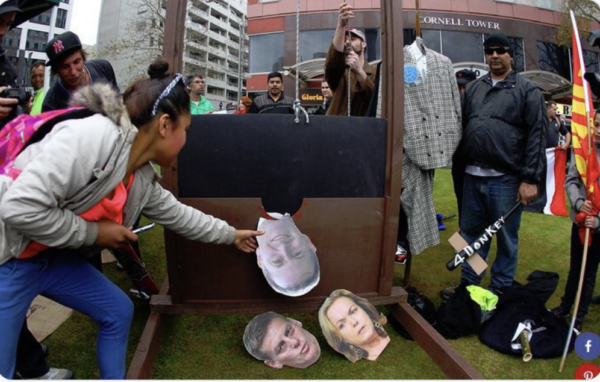 3,000 people marched up Queen Street and witnessed the first tents going up – establishing the first of what would eventually become four occupations in Auckland.

The post-2008 Global Financial Crisis (GFC) period had hit hard. Thousands more Kiwis were homeless. The public had lost complete faith in systems of capital, in governments, and were desperate to achieve redress by whatever means necessary.

Just as now, mass protests began popping up all over the globe.

At our encampment in Aotea Square, we Occupiers hauled ass to feed and care for everyone present, while also organising a constant stream of protest actions to try to get our voices heard.

It wasn’t long before the political pushback came and it came via information operations. Media were the conduit.

We were mortified when some complete and total scumbag defaced the Jewish cemetery on Symonds Street with Nazi symbols. Even more mortified when the media began reporting that he was an Occupier. Those of us who were at the Occupy daily had never seen or heard of the guy.

If, at Occupy Auckland, we’d got our hands on the guy who’d defaced the Jewish cemetery he would have swiftly met an unpleasant fate.

But so it began. “Occupy Auckland is Neo-Nazis” became the mantra, weaponized against us.

This was coupled with “Occupy Auckland is disorganised”. “Occupy Auckland don’t even know what they want”. And most disgustingly of all, after the Auckland Council removed our Port-A- Loos without notice and then cut off the water supply to the occupation – “Occupy is unsanitary and has feces on the ground.”

I never saw a single spec of feces on the ground at the Occupy but it didn’t matter – these narratives wielded against protest movements aren’t about the truth. They’re about achieving political agendas.

It’s the same old playbook. But this time it isn’t just coming out of the mouths of the power elite and their stenographers.

It’s coming from the Left.
The same Left who has been targeted by these very tactics since time immemorial.

by media); before I began developing software tools like Panquake; before I became a very public advocate for WikiLeaks founder Julian Assange; before I wrote deep dive investigative pieces into the GCSB, or studied Snowden files live online; I was just a lay person, a solo mother and an activist, who happened to be using photojournalism and live-tweeting to document our protest actions at a time when live-streaming was so new that we were lucky if we had one person in the crowd doing it.

I covered over 50 protest actions on the ground in New Zealand before persistent extra-judicial targeting by NZ Police and related private intelligence and security contractors finally drove me out of the country.

I remember that time in my life so vividly, because it has impacted every facet of my life since.

At those 50+ actions, I met a ton of people, interviewed a whole bunch of household names, and made some lifelong mates. The kind that you know will have your back when you’re David fighting Goliath.

Fast-forward to 2022 and half of those mates are in Wellington backing the protests. The other half are using social media to decry, attack and denounce those who are at the Wellington protests.

A couple of very good friends of mine have done some pretty amazing work identifying and exposing some of the ACTUAL white supremacists that have been infiltrating the Wellington Convoy.

But that doesn’t make the rest of the people protesting in Wellington any more white supremacist than we were at Occupy Auckland. If you turn the sound off on the TV reports so that you can’t hear the news anchors spitting buzzword after buzzword, what you’ll actually see is everything from rainbow flags to Maori sovereignty and indigenous rights activists, as well as protest chaplains and entire families of every ethnicity imaginable.

When you deride them as right wing, you simultaneously push them towards the right wing and alienate them from the Left.

Thus, the Left is no longer united and strong, as we were in the face of John Key’s more naked avarice and state violence.

Witnessing the division, is gutting. It’s just so goddamn counterproductive. What good is a Team of 5 Million if you then start picking people off, sub-group by sub-group, and cheering the attrition on.

Is this the ‘Left’ in New Zealand now? Parrots of the media class? Spouting narratives that have been used against us during our own protest actions over and over, regurgitating them, projecting them at other down-and-out members of the public?

The homelessness crisis we faced in 2011 and 2012 just got worse every year. By 2014 our homeless peoples were sleeping in piles in doorways. It was mortifying. And that was when things were a thousand times better than they are now, with families being permanently confined to motel rooms, to garages, to campervans, to cars, or to worse.

Do you really think this is just about mandates? It’s not.

It’s about the collapse of Western society and it’s been a progressive decline for generations. Open your eyes and you’ll see it in the now-permanent tent cities in Los Angeles, in Philadelphia, far outside the realm of protest. On the current trajectory, that is the future of every NZ city.

While corporations graduate from stashing billions to stashing trillions, ordinary people are paying the price and political vultures are already preying upon their vulnerability.

If we don’t do something about the meta issues that the status quo is perpetuating, the Wellington occupation isn’t going to be a protest event.

It’s going to be a way of life.
If the Left doesn’t remember who we are… the Left will become only a memory.

Suzie Dawson is an activist, journalist and the Founder of panquake.com