Chris Trotter, in his recent TDB article asks “Where is  the peace movement? Why has the Russo-Ukrainian War not generated a global movement for, at the very least, an immediate cessation of hostilities?  “

Oh but there is a worldwide peace with justice (true peace)  movement but it is shut out by corporate controlled mainstream media. In February, over 100 American Peace Activist NGOs including :  CODEPINK, Black Alliance for Peace, Dorothy Day Catholic Worker, Global Network Against Weapons & Nuclear Power in Space, Massachusetts Peace Action, Pax Christi USA, Veterans For Peace, Physicians for Social Responsibility, Women’s International League for Peace and Freedom and ,World BEYOND War issued  the following statement:

“As organizations representing millions of people in the United States, we call upon President Biden to end the U.S. role in escalating the extremely dangerous tensions with Russia over Ukraine. It is gravely irresponsible for the president to participate in brinkmanship between two nations that possess 90 percent of the world’s nuclear weapons.”

The peace activists called for: Russia Troops out if Ukraine, NATO not to Expand, Negotiations not Escalation, no Sanctions.

Distinguished academics and experienced diplomats have written about the situation which they view with alarm: Diana Johnstone, Chris Hedges, Bruce Gagnon, Scott Ritter, Noam Chomsky, Medea Benjamin and others.  Many of them view  the situation as a war beween the US and Russia, that the US is determined to ‘fight to the last Ukrainian.’ Biden has let slip that the US is calling for regime change.

“ It is worth casting our minds back to the first quarter of 2003. The United States and the United Kingdom were engaged in obvious preparations for a full-scale military invasion of Iraq. All over the world people were gathering in huge demonstrations to oppose the US/UK plans. Over a million protesters flooded the streets of the UK’s largest cities in what was, almost certainly, the largest political protest in the nation’s history.”

Here in Christchurch  Martin and I joined others in holding anti-war protests  near the Christchurch airport .

Yet public pressure, pressure from below, failed to stop the war on Iraq.

Quoting Chris again, I assume speaking for the general public,

“And we are suffering, but not in a way that does Russia any good. Our suffering is vicarious, inspired by the pain and heroism of the Ukrainian people. How else are the people of the West supposed to feel when they are presented with the image of a Ukrainian father, now a soldier, fighting back tears as his wife and son are borne away from him on a westbound train to safety, clutching in his hands his little boy’s toy ambulance – all that is left to him? Are we supposed to be filled with an urge to make peace? Or, are we already part of the war?“

Oh yes, we are presented daily with “images of the pain and heroism of the Ukrainian people.” Media images have convincd us. This is our cause.

Meanwhile Saudi Arabia continues to bomb Yemen with American weapons. Never mind. No images of Yemeni  fathers or mothers or children fighting back tears.  No images of Afghan parents agonizing of having no food for them or their children.

There were no  images from Iraq. No images of Palestinian children being brutally beaten by so-called settlers and the IDF.

Why no images of “Pain and heroism” of the  Iraqi or Yemeni or Afghani or Palestinian people?

Nevermind. As a BBC reporter reminded us, those people are not even civilized. They aren’t even worth worrying about.

We’ve been sold the war on Ukraine. Biden has said that the conflict is a “clear test for democracies around the world.”

We want to be part of it and will do our bit to ensure the war continues.

Chris quoted an observation made by Time Magazine  during the Iraq war protests , describing  “the global peace movement as the other great power on the planet. “

It appears though that controlling the world’s media is “the other great power on the planet.”

That would explain why it is so important for the powerful to ‘disappear’ Julian Assange! 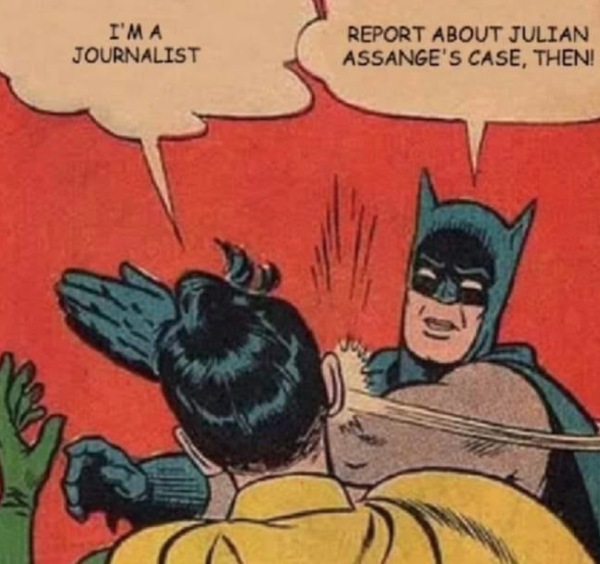