As TDB has been pointing out since the beginning of this pissing match, Putin is invading the Ukraine.

The Dow suddenly woke up to this and that sparked the mass sell off late in the session on Friday.

You know war is coming when the bankers start running.

I think Putin’s solitary presentation at the Piskaryovskoye Memorial Cemetery in January to honour the defenders of the Siege of Leningrad spoke volumes. This is a man looking at legacy, looking at the history books and wanting to carve his reputation into the annals of time. 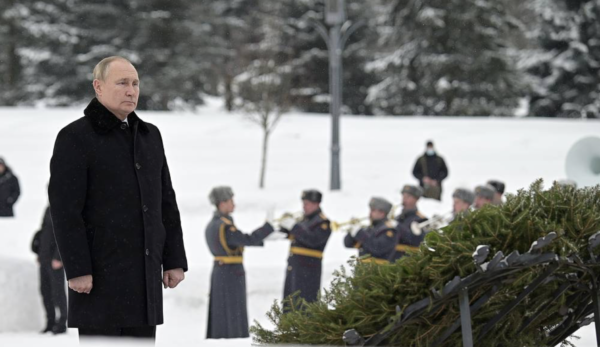 He wants a fight. A calculated battle that restores Russian prestige while destabilising America just enough to avoid open conflict.

Here’s my thoughts on what happens next.

Russia launches an invasion after the Winter Olympics while China simultaneously cracks down symbolically in Hong Kong or on Taiwan. While I don’t think China would invade Taiwan, there are small islands off the coast they would certainly consider taking.

Putin will consider his annexing of the Eastern Ukraine and Black Sea coastal assets as acceptable in the face of Western aggression.

Biden responds with enormous economic sanctions that includes banking which will hurt Russia.

Russia responds by giving Iran the last pieces they need for nuclear capability WHILE cutting Russian Gas and Oil which will cause enormous economic pain in the West.

Israel responds to Iran gaining nuclear technology with a massive never before seen military strike on all Iranian nuclear assets which causes oil prices to explode and supply chains to freeze to a stand still.

Inflation jumps beyond 10% in NZ.

If this plays out, expect China’s diaspora in NZ to create enormous tensions and America’s Steve Bannon network to attempt to pollute the political debate.

Shit is about to get real and will put the protest on Parliament’s lawns into perspective as the rest of the planet burns with conflict.