ACT leader David Seymour is lukewarm on the prospect of working with Te Pāti Māori in a hypothetical centre-right administration but is leaving the door slightly ajar to NZ First. 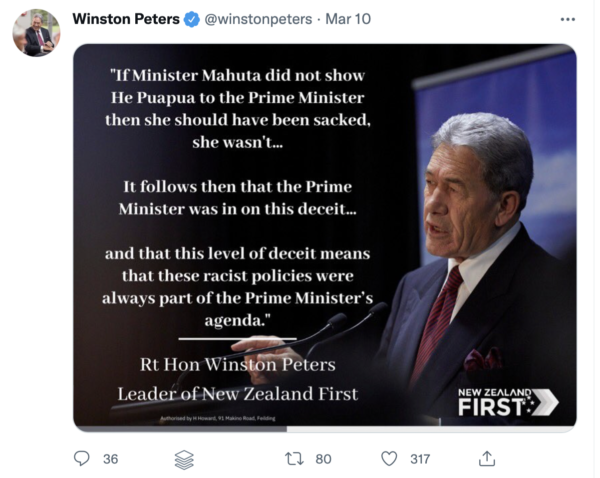 …every Pakehas favourite Maori basher, Winston Peters at his fear of a brown planet finest.

While David is right to point out how flakey the Maori Party are, damning them while opening the door to Winston is like a panel of lepers judging a beauty contest in terms of philosophical high ground.

Forget who David is prepared to get into a political Ménage à trois for, if we want to critique race policy, ACT want to start a race war in NZ by stripping out the Treaty from every law!

ACT party leader David Seymour has mocked “Red Queen” Prime Minister Jacinda Ardern in a state of the nation speech, and is promising to do away with government agencies and remove the Treaty of Waitangi from the country’s laws.

Let’s be very clear, ACTs call to strip the Treaty out of every law would start a race war.

David can be as much of a smug intellectual as he likes, but selling raw meat racism to angry white males with policy promises that would lead to a race war isn’t clever politics, it’s fucking dangerous and it’s fucking ugly.

I’m not sure why a political party who want to escalate racial divisions by taking political rights away from the indigenous population is being asked their views on who they would form a Government with, surely the question is who the hell would empower a hard right political party like ACT?