The dream is over.

The Commerce Commission has been reigned all the way back into making meaningless tinkering to a duopoly that is screwing over Kiwis and denying cheaper food for consumers, better prices for producers and better conditions for workers. 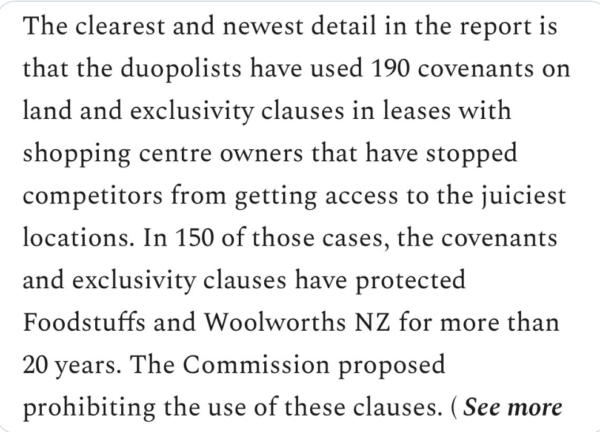 The initial report was radical and suggested the State step in and take a 3rd of the supermarket industry and force competition that way.

I believe it was a strategic political master stroke that Labour should have picked up.

Cost of living is crippling people.

After 2 years of Covid, voters want more than to be told to ‘endure more’.

A new Supermarket chain with a focus on better prices for consumers and producers is the very type of market regulation New Zealander’s are screaming for.

We need big universal ideas that will bring down the cost of our merely living in NZ.

A new Government backed chain of Supermarkets could do that. Likewise free public transport, GST off fruit and vegetables, free school breakfasts ands lunches, mass State House build and free dental for everyone!

We just made the rich a Trillion dollars richer, let’s not pretend there isn’t the money for these types of vast upgrades of people’s existence!

Unfortunately the political Left are too busy calling people they don’t like Nazis and cancelling anyone who doesn’t show their pronouns in their Twitter profile to demand actual solutions to housing, poverty and inequality.

Labour won’t do a thing about the Supermarket Duopoly, if they won’t bother picking up the largest recommendation from the Royal Inquiry into Historic State abuse after calling for it and paying over $140million, they sure as Christ can ignore anything the Commerce Commission is frail enough to suggest.

Labour will merely tinker and the poor will suffer 10% inflation by December.