The ACT Party has demanded an apology from Stuart Nash after he suggested Groundswell was full of racists and anti-vaxxers.

Mark Cameron, ACT’s spokesperson for primary industries, has accused Labour of showing their “true colours” when he questioned whether the Government had met with Groundswell.

Labour MP Stuart Nash – who was answering questions on behalf of Damien O’Connor – questioned the farming advocacy group’s beliefs after they made headlines for racist comments made by one of their members.

“I’m not too sure what Groundswell stands for these days and that is what I have read on their website,” Nash said at question time in Parliament on Thursday. “It’s a mixture of racism, anti-vax etc.”

In a statement, Cameron said Nash had shown “utter contempt” towards rural New Zealand and called on the Prime Minister to force him to apologise to the farming advocacy group.

But Groundswell are full of racists and antiVaxxers – so Labour’s ‘true colours’ are telling the truth?

I’m not sure that’s the burn ACT thinks it is?

This is Tatua Dairy board member Ross Townshend. He is a proud Groundswell supporter, here is the racist shit he posted… 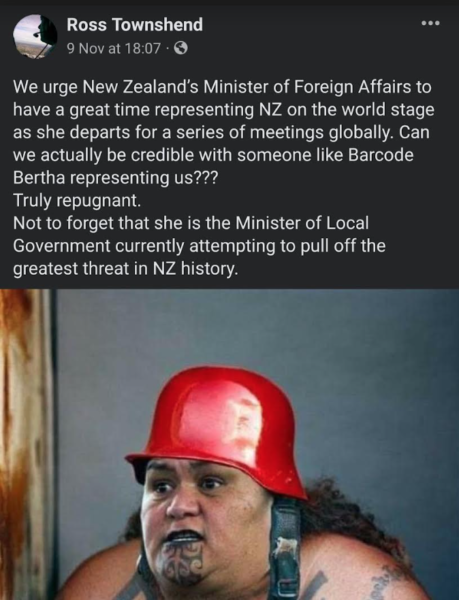 …he had to resign for that!

How ridiculous is it for ACT to pull on their easily triggered trousers and run around screaming for safe spaces for the crazily offended?

Who knew that beneath the surface they are as cowardly and weak as the woke!

These banjo twanging Groundswell rednecks who are outraged that their century long pillage of water and natural resources is over is the sad howl of a sector finally being held to account.

While we love our friendly farmers who provide for us, the corporate farmers who wreck our environment so they can exploit it and sell food to 50million others can go fuck themselves.

ACTs faux outrage and offense at rednecks  being called out is so Wellington woke petty!