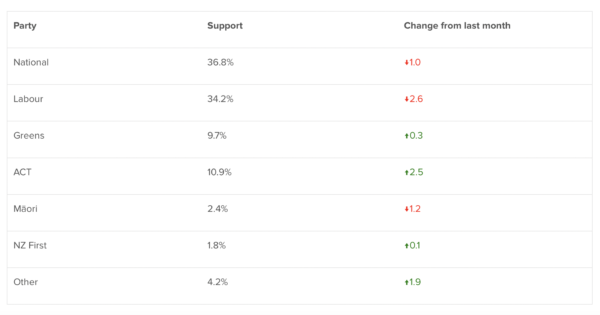 ACT’s David Seymour says Christopher Luxon may not be able to keep his “promise” that Nicola Willis will be the Finance Minister in a future National-led Government as Kiwis may want him in that role instead.

ACT’s alternative Budget, released on Monday, has sparked a conversation about what policies the National Party could support in any future governing arrangement. For National to take the Treasury benches again, it’s highly likely it will need ACT’s seats for support.

But Luxon, the National leader, has resisted getting into what ACT policies his party could support, saying any discussion about governing arrangements is too far off at the moment. He has repeated National’s current position on the likes of increasing the superannuation age and the tax system.

…Many blokes have walked away from Labour and the Greens and are voting National because they are sick of Jacinda and our ever triggered woke hysterical activists.

1: Luxon can do the 45 second CEO soundbite but he has zero intellectual curiosity, he is a devout evangelical Christian whom believes his wealth is proof positive that Jesus loves him. His policies will make things far far far worse in this country in terms of housing, inequality and poverty so don’t pretend voting against Jacinda for him makes you radical or edgy, it makes you a fuckwit

2: Luxon is such a boofhead, he’ll let David run rings around him in terms of pushing through crazy ACT Party policy because Luxon isn’t interested in philosophy, he’s interested in God’s love of him being the best he can be. Policy is something the little people do, and Christopher don’t do little people stuff. National are selling Luxon’s certainty to you, and that’s all.

Make no mistakes that Seymour wants to ram this madness through, and Chris Luxon is intellectually too vain to stop him.

New National recruits are voting because they are angry with Labour and the Greens, they don’t realise yet what they are actually getting with that protest vote.

Once punters realise what the fuck crazy David Seymour can ram past an easily distracted Luxon, the sooner they’ll come back to Labour.

Sure, male voters are pissed off with the Left, but they’re not fucking insane.

Luxon needs Nicola to soften his hard right ‘abortion is murder’ stance from female voters but he doesn’t have any intellectual curiosity towards the ants who live under him, and David Seymour is vastly smarter than this clown and will get all of this vast mutilation of the State’s capacity through without Luxon noticing or caring!

Luxon is a big ole’ CEO alpha bull boofhead with zero intellectual curiosity and just the total certainty that Jesus loves him, David Seymour will play him like a fiddle and you all known it!

The smart yellow fox will jump over the lazy blue log.

The next election will be the most polarised in NZ’s history.