The absolute impunity which the Aotearoa New Zealand government has given to Israel’s racist apartheid regime over many decades and the cowering of the Aotearoa New Zealand media in the face of threats of false smears of anti-semitism from the racist pro-Israel lobby are the key factors in the daily murder and mayhem conducted by Israeli troops in Palestine.

The latest killing is of Palestinian journalist Shireen Abu Akleh which was described yesterday by Al Jazeera and eyewitnesses as an “assassination in cold-blood”. 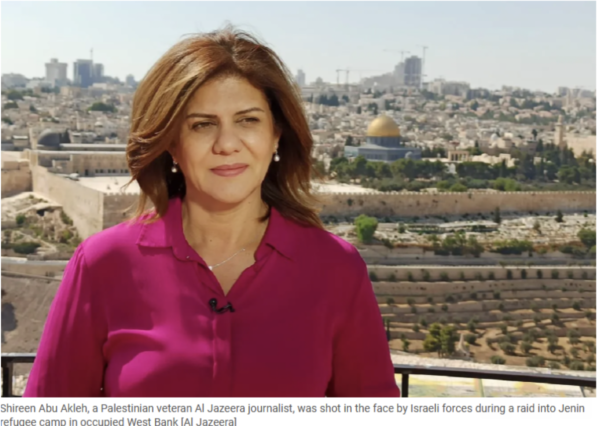 This veteran journalist has been the “voice of the voiceless” as she has fearlessly reported on Israel’s military occupation of Palestine over many decades.

Her fearlessness is in sharp contrast to Aotearoa New Zealand media reporting on Israel/Palestine which includes multiple, repeated inaccuracies which reinforce Israel’s “justifications” for its brutality. Most New Zealanders do not even know Israel runs a military occupation over the entire area of historic Palestine.

With rare exceptions our media simply provide a safe portal for Israeli propaganda.

Meanwhile our Ministry of Foreign Affairs, if they say anything at all about Israel’s occupation or unbridled brutality are much more likely to criticise Palestinians than they are to criticise Israel. If they spoke out about the Russian invasion of Ukraine like they do the situation in the Middle East they would be blaming Ukrainians for “provocations against Russian troops” and ask Ukrainians to exercise “maximum restraint” in the face of Russian brutality.

It’s hypocrisy on a grand scale.

We call out human rights abuses to a US agenda. We condemn Russia and China but look the other way with Israeli or Indonesian brutality.

None of this has changed under the current minister Nanaia Mahuta who been silent for over 18 months on the Palestinian struggle.

Silence is never an option when it comes to human rights. It is the position of cowards.

Until Israel is called out for its racist apartheid policies and the consequences which flow from that, it will continue to murder with impunity.

We have yet again asked the minister to speak out and demand an independent investigation and accountability for Shireen Abu Akleh’s assassination.