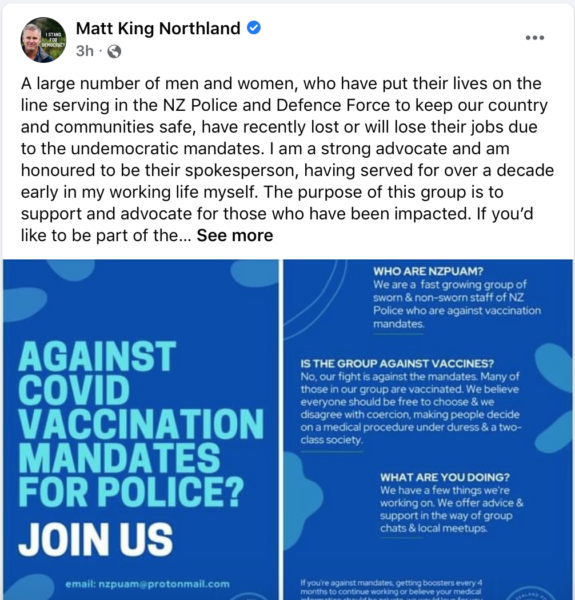 …these groups are far right and prone to radicalization thanks to Facebook hate algorithms, once again as we had with Harete Hipango yesterday, this is a case of National Party MPs supporting AntiVaxx lunatics.

If you think Jacinda is the anti-Christ, or the beginnings of Nazi Germany or raping Gaia, or is committing genocide, then any action is acceptable to stop that. The radicalization of the unvaccinated will reach fever pitch as the economic ramifications of being sacked from a job for refusing the vaccine starts to bite deeply.

My fear originally from the antivaxx radicalization we’ve seen was that political violence would be used against our politicians or academics or public health officials.

I think those antivaxxers will see everyone who has become vaccinated as the target.

Soft targets will be seen as legitimate.

Expect children being vaccinated to be the flashpoint.

Anything symbolic will become a target.

This splinter group within the Police must be immediately infiltrated by the SIS to monitor them because if there is a lone wolf domestic terror attack, former Police Officers sacked for not getting vaccinated is the first breeding pool to check out.