New Zealand news
Home Featured 20 years ago I fought the Law – And I won!

Twenty years ago, as Parliament last investigated the legal status of cannabis, I was arrested and put on trial for cannabis possession. Although I won the case, the fight was lost. Now as another opportunity for reform – the referendum – slips by, we can’t wait another two decades.

It’s been twenty years, but I’m reminded of it every day.

On the 15th of February, 2002, I was found “not guilty” of cannabis possession by Judge Gittos in the Auckland District Court. I had been put on trial for a crumb of cannabis following a police sweep of Karangahape Road, not far from where my shop The Hempstore is now located, where I’m writing this.

It was so mundane; it could have happened to anyone. After meeting a friend for coffee at Brazil café, we talked a while on the footpath and, minding our own business, we paid no attention to a group of cops in the vicinity. It turns out they were moving the length of K Road searching people they came across.

It also turned out they were on a training exercise, with nearby senior officers coaching them on what to do and assessing their performance.

The three young officers approached us with enthusiasm for the task, and dove right into my pockets. I objected, and was told to “shut up, c*nt!”. They made me drop my pants in a nearby alleyway.

They eventually found a tin containing a tiny morsel of cannabis and I was immediately arrested, again with some enthusiasm. I believe her words were “We’ve got you, c*nt, you’re fucken arrested!”

But they didn’t know I would get three wins from that arrest. 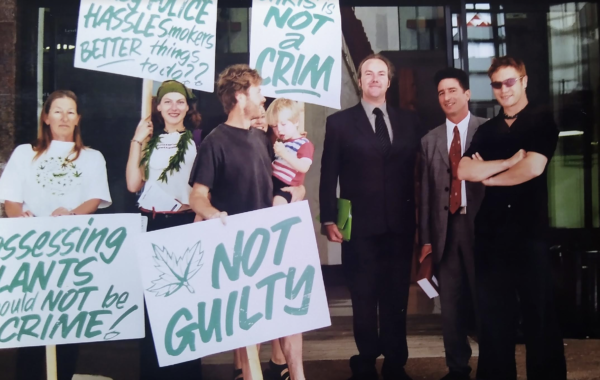 Parliament’s health select committee was at the time holding an inquiry into the legal status of cannabis, instigated by former Green MP Nandor Tanczos (also my friend and business partner in The Hempstore).

Police and other apologists for prohibition had been telling the inquiry they did not go around looking for cannabis and certainly didn’t breach anyone’s rights – and yet here they were, caught doing it.

Of course, what they did to me was a routine occurrence repeated by police many times every day across Aotearoa. Contrary to their narrative of only going after Mr Bigs or coming across it while investigating dodgy people for other crimes, the police were at the time arresting more than 15,000 people every year for cannabis, and the vast majority were for possession or use.

Fortune smiled and I was able to raise awareness with the very committee deciding the law. From that point on, committee chair and Labour MP Judy Keall would shout down anyone who tried to claim police did not go around looking for cannabis, often pointing to me and exclaiming “I know someone that’s happened to recently – and he’s sitting right there!” 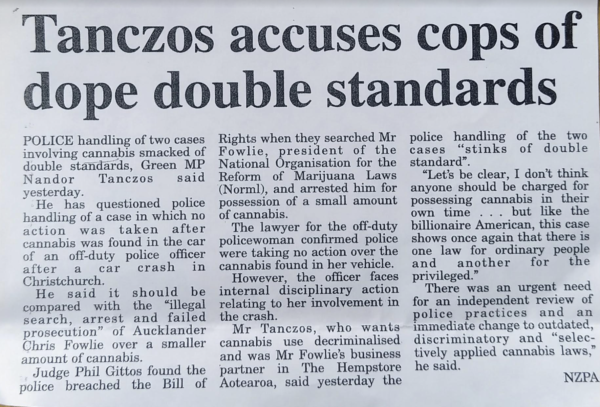 I took that as a win and resolved to use the experience to help keep the inquiry informed about what happens to people who the police choose to arrest for cannabis.

As my trial approached, there was no way I was going to plead guilty. I had my witness, a great lawyer in Peter Winter, and so many supporters turned up we had to move to a bigger court room.

While those three young officers had been coached to breach people’s rights while performing sweeps of public spaces, they had not been coached well enough on how to tell the same story in court.

They all told different, conflicting versions. Judge Gittos was not very impressed, I was found not guilty, and his ruling set a new precedent: police could not simply invoke the smell of cannabis to get around the Bill of Rights and search people who they had no legal authority to search.

The media helpfully let everyone know. It was the lead on the news that night, and front page of the Herald the next day (Random street searches unlawful – Weekend Herald, 16-17 February 2002). It was discussed in Parliament.

Predictably, the Police said the ruling would change nothing. Police Ass spokesperson Greg O’Connor said they would continue, business as usual, despite accusations of double standards as they took no action against a fellow officer when a larger amount of cannabis was found in her crashed car. 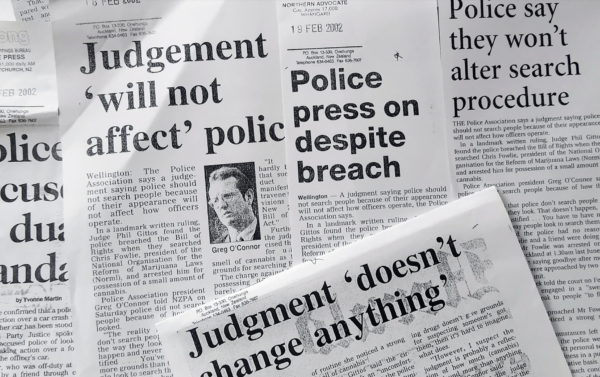 But the precedent from my case can be cited by anyone who police search in public, if they claim they can smell cannabis. Even if they could, that smell could be coming from anywhere, like a car driving past or a person who is no longer there. I’ve personally met dozens of people who have been helped by this.

Then the third win. For some unknown reason The DominionPost published that I had been remanded in custody on cannabis charges. I thought that implied to anyone reading that I was facing serious charges such as large-scale manufacture, or that I had a history of convictions, none of which is true, and that this would seriously impact my reputation.
They refused to retract or apologise, so under Peter Winter’s guidance I whipped up a letter which prompted their lawyer to offer $5000 to go away. Never take the first offer, Peter advised. We got a correction, and their $10,000 settlement let me embark on an epic cannabis-themed (and fuelled) OE.

I started at the NORML Conference in San Francisco, then headed to Vancouver and over to London for J Day then the pioneering British coffeeshops in Lambeth, Bournemouth and Stockport. 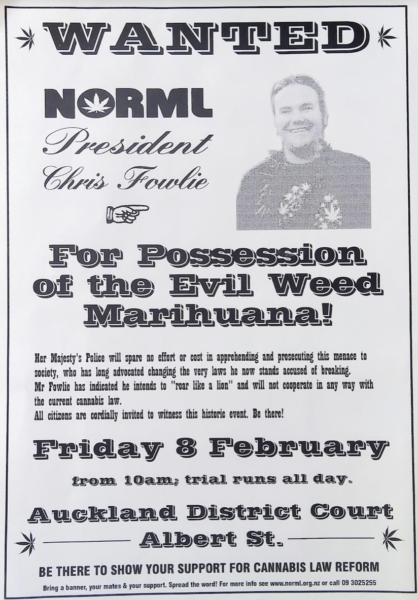 Nandor had given me a letter stating I was collecting information on his behalf for the ongoing cannabis inquiry. I met officials in the Netherlands and the UK. I took the Coffeeshop College course which had a practical component of dealing hash in a coffeeshop.

In Copenhagen’s Christiania freezone I bought hash for research purposes. I joined the Cannabis Social Clubs in Barcelona and helped out on cannabis “tea” farms in Switzerland.
Like much of the world at the time, Europe was experiencing a joyous wave of renewed cannabis freedoms. This was all reported back to the inquiry, on The DominionPost’s dime.

But I got back to what appeared a different country. I had left on a surge of reformist euphoria, with Nandor’s inquiry in full swing. I got back to Peter Dunne, the televised worm, and his dirty deal to derail cannabis reform.

The worst thing about it was the change had nothing to do with cannabis. The corngate scandal resulted in Helen Clark going with Peter Dunne’s United Future party and casting the Greens into opposition.

The cannabis inquiry was over. It crawled along for a few months with new members and delivered a watered-down report that made few recommendations of any substance.

Bear with me because this reminiscing does have a point! A senior Labour MP told me at the time “You’re fucked now! It will be twenty years before this is on the agenda again.”

How so? They explained the best chance we had before that had been the mid-80’s under Lange’s Labour. Now we would have to wait for Clark’s government to see out their term, then suffer a period under National, then go for the next Labour-led government.
It won’t be in the first term, they predicted, but in the second. The third term gets conservative again as they lose popularity.

This is the cycle, told to me in 2002. It came to pass, and it looks like it will happen again.

Interestingly, the people at the centre of blocking reform twenty years ago – Peter Dunne, Greg O’Connor, and Helen Clark – now all support making cannabis legal.
So here we are, twenty years and thousands of arrests later, in the second term of a Labour-led government.

A government which decided to run a referendum but not campaign for it; and then decided to bind itself to the result of a question that had only 30% support when they decided it.

This was our time, our chance, to finally put an end to the shameful, oppressive, counterproductive Misuse of Drugs Act. They blew it.

They had better fix it. We can’t wait another twenty years. 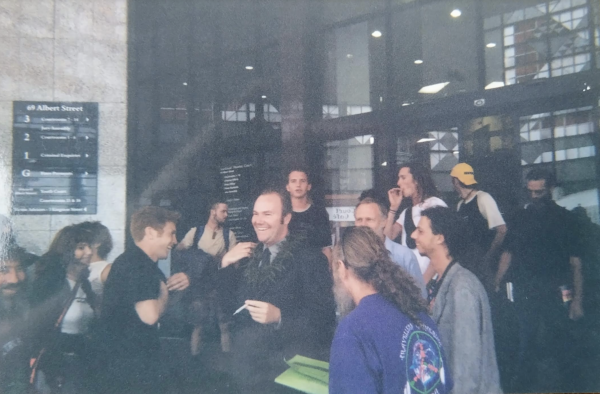 Chris Fowlie is the president of the National Organisation for the Reform of Marijuana Laws NZ Inc; developer of the CHOISE model for cannabis social equity; CEO of Zeacann Limited, a cannabis science company; co-founder of the New Zealand Medical Cannabis Council; co-founder of The Hempstore Aotearoa; resident expert for Marijuana Media on 95bFM; cannabis blogger for The Daily Blog, and court-recognised independent expert witness for cannabis. The opinions expressed here are his own.